The Two Boy Hostages
At The Siege Of Seringapatam

In the year 1791, Lord Cornwallis, then Governor-General of India, made preparations for a final and decisive campaign against Tippoo. He had not proved himself a successful commander in America, where he was compelled to surrender himself and army to Washington; but this time fortune was to follow his arms. His great object was to capture the principal stronghold of the tyrant, Seringapatam; with this in view he proceeded to reduce all the intermediate fortresses, and in February, 1792, appeared in sight of the famous city, in the dungeons of which many a British soldier had suffered both a weary imprisonment and a cruel death.

The army gazed with admiration and wonder on this magnificent Oriental city, its vast extent of embattled walls bristling with cannon, on the domes of its mosques which rose above them, on the cupolas of its splendid palaces and the lofty facades of the great square pagodas. It was garrisoned by no less than 45,000 men, while beneath its walls were encamped the troops of the sultan. To attempt the capture of so strong a place seemed an impossibility. 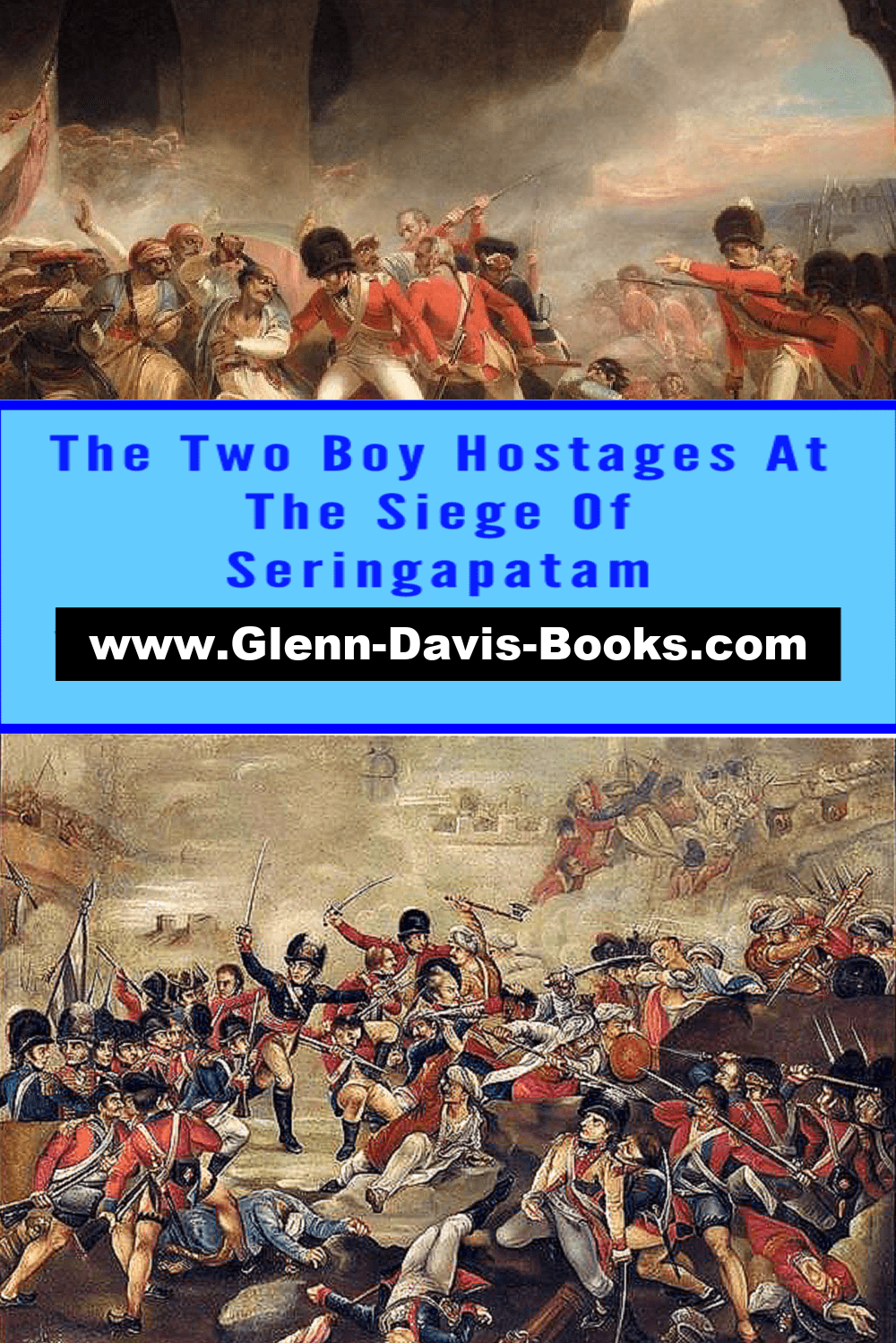 Great indeed would be the issue of the contest between the two hostile armies. Should the British and their allies be defeated there was nothing before them but a disastrous retreat over hundreds of miles of country already laid waste by sword and fire; while if Tippoo suffered a reverse nothing remained for him but a humiliating surrender. The ardour of Cornwallis's troops had been kindled by the stories of the frightful tortures which the despot had practiced upon his helpless prisoners, and they were passionately desirous of avenging them.

Although his forces were far inferior in number, Lord Cornwallis decided upon an immediate attack on the enemy's camp in three divisions. The evening was calm and beautiful, the moon just rising to shed her silvery light over the scene, as the troops moved on in silence, but with hearts beating high with courage and hopes of success.

Lord Cornwallis himself led the centre division, sword in hand, and headed several bayonet charges, during which he received a wound in the hand. The attack took Tippoo by complete surprise. On the first alarm he rushed from his gorgeous tent and sprang on to his horse, and as he did so a mass of fugitives thronged past him, conveying the intelligence that his centre had been penetrated, and a column was marching to cut off his retreat from the great ford leading across the river Cauvery to Seringapatam. He had only just time to make good his escape.

All night the fighting raged, and by morning Tippoo reckoned he had lost, in killed, wounded, and missing, no less than 23,000 men. Being unable to recapture his largest--the sultan's--redoubt, he abandoned all the others, and, in a fit of despair, withdrew his forces to the island and fortress of Seringapatam, there to make a last stand.

The besiegers pressed forward with vigour, and on its two principal sides the city was completely invested. The pioneers and working-parties were actively at work, and soon turned Tippoo's wonderful garden into a scene of desolation. The sultan saw that his situation was becoming desperate, and made an attempt to negotiate, but at the same time thought to paralyze the efforts of the English and end the war, by procuring the assassination of their chief. A number of horsemen, drugged and maddened by bhang, vowed to bring to the sultan the head of his foe, and lay it at his feet as an offering. They made a dash into the British camp, but before they could secure their trophy were routed, and most of them slain.

It is impossible to enumerate all the deeds of heroism performed during the battle and the progress of the siege--the bravery of Captain Hugh Sibbald, who, with a hundred Highlanders, captured and defended the sultan's redoubt against innumerable odds; of the courage of Major Dalrymple, with his Highlanders and Bengal infantry, who, to draw attention from the working-parties, crossed the Cauvery, and fell furiously upon Tippoo's cavalry camp. Every British soldier seemed animated with a dauntless courage. Meantime a trench had been opened within 800 yards of the walls, and the advances carried on with spirit and energy. The anger of the Oriental despot manifested itself by a continual discharge of cannon.

Eighteen days after the battle everything was ready for a grand attack upon the citadel of Seringapatam. The British soldiers, flushed with success, and burning to avenge the cruel sufferings and murders of their countrymen, were eager to commence the assault. The besieged, crushed, despairing, expected every minute to hear the roar of the breaching batteries, and to see their stately mosques in flames. At this moment, so full of anticipation, orders were issued to cease all acts of hostility. Tippoo had sued for peace; but at the very instant the order for cessation of firing was issued, every gun that could be brought to bear upon the trenches, and the musketry from all available points, were ordered by the sultan to be fired.

In the treaty which was now drawn up Tippoo not only agreed to release all his prisoners, but to pay the equivalent of $16,500,000, yield up half his possessions, and to place in the hands of the British his two eldest sons, to be retained as hostages till the due performance of his pledges.

Never before had Indian history presented so touching a spectacle as that seen on the day when the young princes were delivered into the hands of their father's conquerors. On the morning of the 26th of February, twenty days only after the appearance of the British before the walls, the two youthful hostages, each mounted on a richly-caparisoned elephant, left the fort. Soldiers and citizens, stirred by deep sympathy, thronged the ramparts to take one last look at the two boys. Even the stern and cruel Tippoo himself was moved, and found it difficult to repress his emotion as, standing on the bastion above the great entrance, he watched the procession.

When the youthful hostages issued from the fortress the guns of Seringapatam thundered forth a salute; and as they approached the British lines they were received with similar honors. Accompanied by the English negotiator of the terms of peace and a guard of honour, they were met at the outposts and conveyed to the camp. "Each was seated in a howdah of chased silver. They were arrayed in robes of white, with red turbans in which a spray of pearls was fastened, while jewels and diamonds of great value were around and suspended from their necks. Harcarrahs, or Brahmin messengers of trust, headed the procession, and seven standard-bearers, each carrying a small green banner displayed on a rocket-pole. After these marched 100 pikemen, whose weapons were inlaid with silver. Their escort was a squadron of cavalry, with 200 sepoy soldiers. They were received by the troops in line, with presented arms, drums beating, and officers in front saluting."

Being conducted to the tent of Lord Cornwallis, who stood at the entrance surrounded by his staff and the various colonels of the regiments, they descended from their howdahs and approached him. Embracing them both, he took them by the hand and led them inside. Although of the respective ages of ten and twelve years, the children appeared to possess all the politeness and reserve of manhood. The principal officer of Tippoo, after having formally surrendered them to the general, said--

"These children were this morning the sons of my master, the sultan. Their situation is now changed; they must look up to your lordship as their father."

Early in the year 1794, Tippoo having fulfilled all the terms of the treaty, the two youthful hostages were restored to their father. They were conducted by an officer to Deonhully, on a plain near which the sultan had pitched his tent. The two boys knelt to their father, placing their heads at his feet. He received them apparently unmoved, touched their necks, and when they arose pointed to their seats; and this was all the welcome they publicly received.