The smallest naval battle ever fought in the world, perhaps, occurred on the Alabama River on the 13th of November, 1813, between two canoes, and this is the way in which it happened.

The United States were at war with Great Britain at that time, and a war with Spain was also threatened. The British had stirred up the Indians in the Northwest to make war upon the whites, and in 1813 they persuaded the Creek Indians of Alabama and Mississippi to begin a war there.

The government troops were so busy with the British in other quarters of the country that very little could be done for the protection of the white settlers in the Southwest, and for a good while they had to take care of themselves in the best way they could. Leaving their homes, they gathered together here and there and built rude stockade forts, in which they lived, with all their women and children. All the men, including all the boys who were old enough to pull a trigger--and frontier boys learn to use a gun very early in life--were organized into companies of volunteer soldiers. 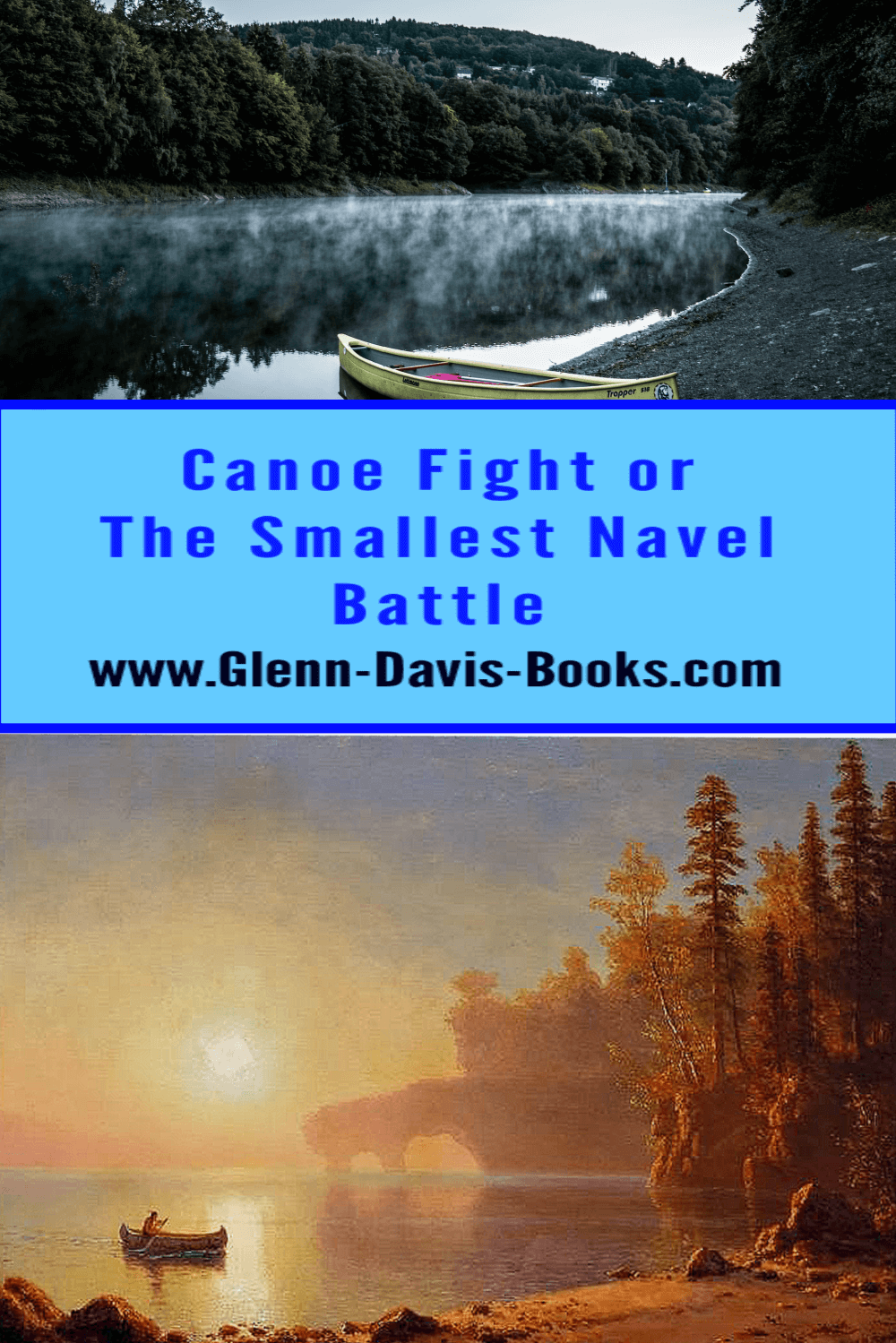 At Fort Madison, one of the smallest of the forts, there was a very daring frontiersman, named Samuel (or Sam) Dale--a man who had lived much with the Indians, and was like them in many respects, even in his dress and manners. Hearing that the Indians were in force on the southeastern bank of the Alabama River, the people in Fort Madison were greatly alarmed, fearing that all the crops in that region--which were ripe in the fields--would be destroyed. If that should occur, they knew they must starve during the coming winter, and so they made up their minds to drive the savages away, at least until they could gather the corn.

Captain Dale at once made up a party, consisting of seventy-two men, all volunteers. With this force he set out on the 11th of November, taking Tandy Walker, a celebrated scout, for his guide. The column marched to the Alabama River, and crossed it at a point about twenty miles below the present town of Claiborne.

Once across the river, Dale knew that he was among the Indians, and, knowing their ways, he was as watchful as if he had been one of them himself. He forbade his men to sleep at all during the night after crossing the river, and kept them under arms, in expectation of an attack.

No attack being made, he moved up the river the next morning, marching most of the men, but ordering Jerry Austill, with six men, to paddle up in two canoes that had been found. This Jerry Austill--who afterwards became a merchant in Mobile and a state senator--was a boy only nineteen years of age at the time, but he had already distinguished himself in the war by his courage.

At a point called Peggy Bailey's Bluff, Dale, who was marching with one man several hundreds of yards ahead of his men, came upon a party of Indians at breakfast. He shot one of them, and the rest ran away, leaving their provisions behind them. Securing the provisions, Dale marched on for a mile or two, but, finding no further trace of Indians, he concluded that the country on that side of the river was now pretty clear of them, and so he set to work to cross to the other side, meaning to look for enemies there.

The river at that point is about a quarter of a mile wide, and, as there were only two small canoes at hand, the work of taking the men across was very slow. When all were over except Dale and about a dozen others, the little remnant of the force was suddenly attacked.

The situation was a very dangerous one. With the main body of his command on the other side of the river, where it could give him no help, Dale had to face a large body of Indians with only a dozen men, and, as only one canoe remained on his side of the river, it was impossible for the whole of the little party to escape by flight, as the canoe would not hold them all.

Concealing his men in the bushes, behind trees, and under the river-bank, he replied to the fire of the Indians, and kept them at bay. But it was certain that this could not last long. The Indians must soon find out from the firing how small the number of their adversaries was; and Dale knew that as soon as the discovery was made, they would rush upon him, and put the whole party to death.

He called to the men on the other side of the river to come over and help him, but they were panic-stricken, probably because they could see, as Dale could not, how large a body of Indians was pressing their commander. The men on the other bank did, indeed, make one or two slight attempts to cross, but those came to nothing, and the little party on the eastern shore seemed doomed to destruction.

Bad as matters were with Dale, they soon became worse. An immense canoe, more than thirty feet long and four feet deep, came down the river, bearing eleven warriors, who undertook to land and attack Dale in the rear. This compelled the party to fight in two directions at once. Dale and his companions kept up the battle in front, while Jerry Austill, James Smith, and one other man fought the warriors in the canoe to keep them from landing. One of the eleven was killed, and another swam ashore and succeeded in joining the Indians on the bank.

Seeing how desperate the case was, Dale resolved upon a desperate remedy. He called for volunteers for a dangerous piece of work, and was at once joined by Jerry Austill, James Smith, and a negro man whose name was Caesar. With these men he leaped into the little canoe, and paddled towards the big Indian boat, meaning to fight the nine Indians who remained in it, although he and his canoe party numbered only four men all told.

As the two canoes approached each other, both parties tried to fire, but their gunpowder was wet, and so they grappled for a hand-to-hand battle. Jerry Austill, being in front, received the first attack. No sooner did the two canoes touch than an Indian sprang forward, and dealt the youth a terrible blow with a war-club, knocking him down, and making a dent in his skull which he carried through life. Once down, he would have been killed but for the quickness of Smith, who, seeing the danger his companion was in, raised his rifle. With a single blow he knocked over the Indian with whom Austill was struggling.

Then Austill rose, and the fierce contest went on. Dale and his men rained their blows upon their foes, and received blows quite as lusty in return, but Caesar managed the boat so skilfully that, in spite of the superior numbers of the Indians, the fight was not very unequal. He held the little boat against the big one, but kept it at the end, so that the Indians in the other end of the big canoe could not reach Dale's men.

In this way those that were actually fighting Dale, Austill, and Smith never numbered more than three or four at any one time, and so the three could not be borne down by mere force of numbers. Dale stood for a time with one foot in each boat; then he stepped over into the Indian canoe, giving his comrades more room, and crowding the Indians towards the end of their boat.

One by one the savages fell, until only one was left facing Dale, who held Caesar's gun, with bayonet attached, in his hand. This sole survivor was Tar-cha-chee, an Indian with whom Dale had hunted and lived, one whom he regarded as a friend, and whom he now wished to spare. But the savage was strong within the Indian's breast, and he refused to accept mercy even from a man who had been his comrade and friend. Standing erect in the bow of the canoe, he shook himself, and said, in the Muscogee tongue, "Big Sam, you are a man, I am another; now for it."

With that he rushed forward, only to meet death at the hands of the friend who would gladly have spared him.

The canoe fight was ended, but Dale's work was not yet done. His party on the bank were every minute more closely pressed, and if they were to be saved it must be done quickly. For this purpose he and his companions at once began clearing the big canoe of its load of dead Indians. Now that only the white men were there, the Indians upon the bank directed a galling fire upon the canoe, but by careening it to one side Dale made a sort of breastwork of its thick gunwale, and thus succeeded in clearing it. When this was done he went ashore and quickly carried off the party there, landing all of them in safety on the other side.

The hero of this singular battle lived until the year 1841. The whole story of his life is a romance of hardship, daring, and wonderful achievement. When he died, General John F. H. Claiborne, who knew him intimately, wrote a sketch of his career for a Natchez newspaper, in which he described him as follows:

"In person General Dale was tall, erect, raw-boned, and muscular. In many respects, physical and moral, he resembled his antagonists of the woods. He had the square forehead, the high cheek-bones, the compressed lips, and, in fact, the physiognomy of an Indian, relieved, however, by a firm, benevolent Saxon eye. Like the red men, too, his foot fell lightly upon the ground, and turned neither to the right nor left. He was habitually taciturn, his face grave, he spoke slowly and in low tones, and he seldom laughed. I observed of him what I have often noted as peculiar to border men of high attributes: he entertained the strongest attachment for the Indians, extolled their courage, their love of country, and many of their domestic qualities; and I have often seen the wretched remnant of the Choctaws camped round his plantation and subsisting on his crops."

It is a curious fact that after the war ended, when Weatherford (Red Eagle), who commanded the Indians on the shore in this battle with Dale, was about to marry, he asked Dale to act as his best man, and the two who had fought each other so desperately stood side by side, as devoted friends, at the altar.