No man ever lived whose name is more honored than that of George Washington, and no man ever deserved his fame more. All the success that ever came to him was won by hard work. He succeeded because he was the kind of man that he was, and not in the least because he had "a good chance" to distinguish himself. He never owed anything to "good luck," nor even to a special education in the business of a soldier. Some men are called great because they have succeeded in doing great things; but he succeeded in doing great things because he was great in himself.

Everybody who knew him, even as a boy, seems to have respected as well as liked him. There was something in his character which made men think well of him. When he was only sixteen years of age Lord Fairfax admired him to such a degree that he appointed him to a post which not many men would have been trusted to fill. He put the boy at the head of a surveying party, and sent him across the mountains to survey the valley of Virginia--a vast region which was then unsettled. So well did Washington perform this difficult and dangerous task that a few years later, when he was only twenty-one years old, the Governor of Virginia picked him out for a more delicate and dangerous piece of work.

The English colonies lay along the Atlantic coast, while the French held Canada. The country west of the Alleghany Mountains, which we now know as Ohio, Indiana, Illinois, etc., was claimed by both the French and the English, though only the Indians lived there. The French made friends of the savages, and began building forts at different points in that region, and putting soldiers there to keep the English away. The Governor of Virginia wanted to put a stop to this, and so he resolved to send a messenger into "the Great Woods," as the western country was called, to warn the French off, and to win the friendship of the Indians if possible.

Washington Takes A Message To The French 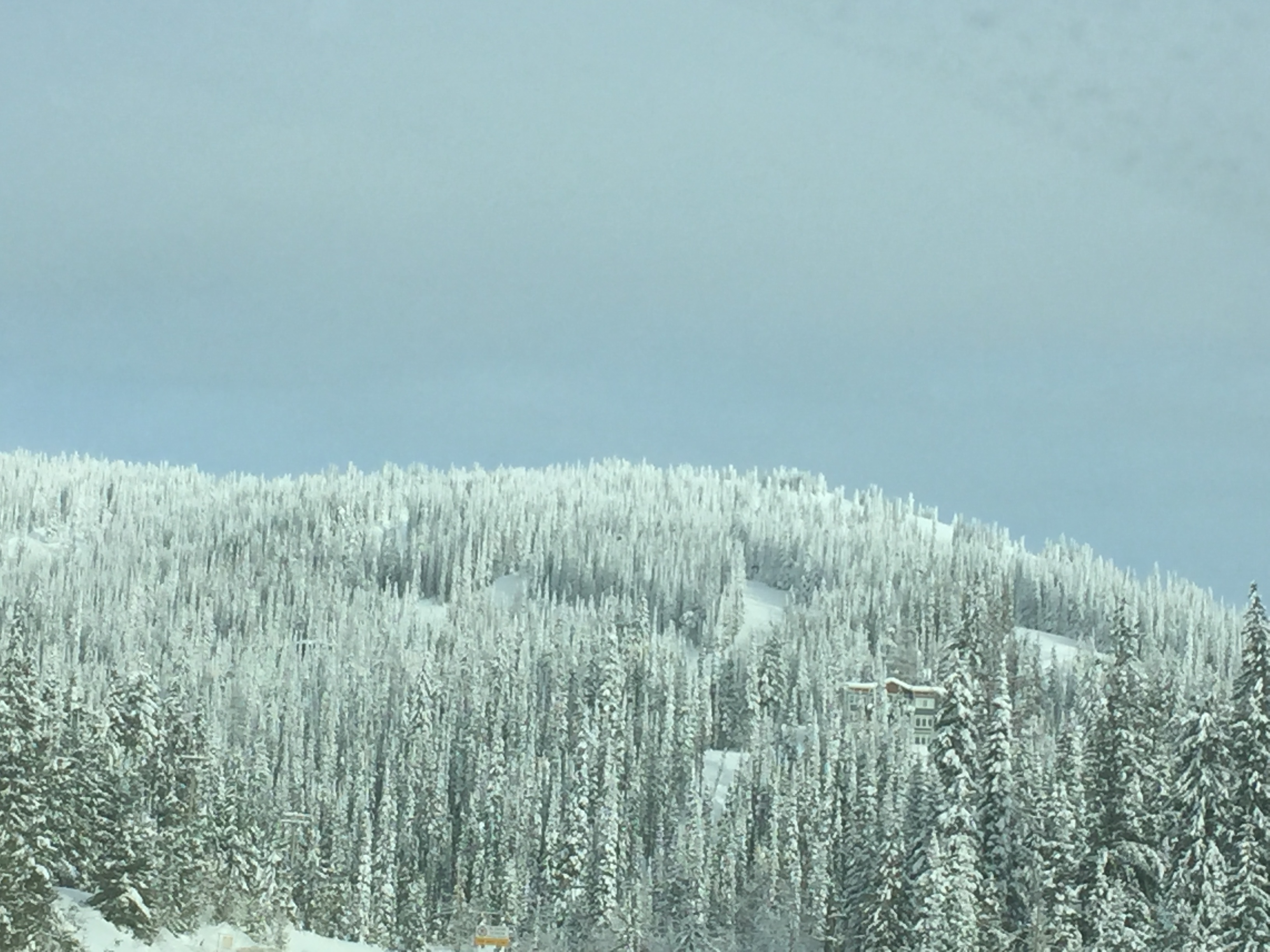 For such a service he needed a man with a cool head, good sense, great courage, and, above all, what boys call "grit;" for whoever should go would have to make his way for many hundreds of miles through a trackless wilderness, over mountains and rivers, and among hostile Indians. Young Washington had already shown what stuff he was made of, and, young as he was, he was regarded as a remarkable man. The governor therefore picked him out as the very best person for the work that was to be done.

It was November when Washington set out, and the weather was very cold and wet. He took four white men and two Indians with him, the white men being hunters who knew how to live in the woods. As the country they had to pass through was a wilderness, they had to carry all their supplies with them on pack-horses. They rode all day through the woods, and when night came slept in little tents by some spring or watercourse. Day after day they marched forward, until at last they reached an Indian village, near the spot where Pittsburgh now stands, and there they halted to make friends with the Indians.

This was not very easy, as the French had already had a good deal to do with the tribes in that region; but Washington persuaded the chief, whose name was Tanacharisson, to go with him to visit the French commander, who was stationed in a fort hundreds of miles away, near Lake Erie.

This march, like the other, was slow and full of hardships; but at last the fort was reached, and Washington delivered his message to the French officer. A day or two later the Frenchman gave him his answer, which was that the western country belonged to the French, and that they had no notion of giving it up.

All the trouble Washington had met in going north was nothing compared with what was before him in going back to Virginia again. The winter was now at its worst, and the weather was terrible. The rivers and creeks were full of floating ice, and the woods were banked high with snow. But Washington was not to be daunted by any kind of difficulty. He set out on his return march, and with the aid of canoes, in which his baggage was carried down a small stream that ran in that direction, he took his party as far as Venango, in the northwestern part of Pennsylvania.

There he found that he could go no farther on horseback. The ground was frozen on top, but soft beneath, and the poor horses broke through the hard crust at every step. There was a French fort at Venango, and Washington might have waited there very comfortably for better weather; but it was his duty to get back to Virginia as soon as possible with the French commander's answer, and so he made up his mind to go on, even at the risk of his life.

Leaving the rest of the party to come when they could with the horses, Washington and a single companion named Gist set out on foot for the long winter march. As they had no pack-horses to carry tents and cooking-vessels and food, they had to leave everything behind except what they could carry on their backs; and as they were obliged to take their rifles, powder-horns, and bullet-pouches, their hunting-knives and hatchets, and a blanket apiece, they were pretty heavily loaded, and could not afford to burden themselves with much else.

Day by day the two brave fellows trudged on through the snow-drifts, sleeping at night as best they could, exposed to the biting cold of the winter, without shelter, except such as the woods afforded. There were other dangers besides cold and hunger. At one time a treacherous Indian, who had offered to act as guide, tried to lead the two white men into a trap. As they suspected his purpose, they refused to do as he wished, and a little later he suddenly turned about and shot at Washington, who was only a few paces distant. Missing his aim, he was quickly overpowered, and Gist wanted to kill him, not merely because he deserved to be put to death for his treachery, but also because, if allowed to go free, he was pretty sure to bring other hostile Indians to attack the lonely travellers during the night.

But Washington would not have him killed. He made him build a camp-fire, and then told him to leave them at once. The Indian did so, and as soon as it was certain that he was out of sight and hearing the two young men set out to make their escape. They knew the Indian would soon come back with others, and that their only chance for life was to push on as fast as they could. The Indians could track them in the snow, but by setting out at once they hoped to get so far ahead that they could not be easily overtaken.

It was already night, and the travellers were weary from their day's march, but they could not afford to stop or rest. All through the night they toiled on. Morning came, and they must have felt it nearly impossible to drag their weary feet farther, but still they made no halt. On and on they went, and it was not till night came again that they thought it safe at last to stop for the rest and sleep they needed so badly. The strain they had undergone must have been fearful. They were already weary and wayworn when they first met the treacherous Indian, and after that they had toiled through the snow for two days and a night without stopping to rest or daring to refresh themselves with sleep.

Just before reaching their journey's end they arrived at the brink of a river which they expected to find frozen over; but they found it full of floating ice instead. Without boat or bridge, there seemed no chance of getting across; but after a while they managed to make a rude raft, and upon this they undertook to push themselves across with long poles.

The current was very strong, the raft was hard to manage, and the great fields of ice forced it out of its course. In trying to push it in the right direction, Washington missed his footing and fell into the icy river. His situation was very dangerous, but by a hard struggle he got upon the floating logs again. Still the current swept them along, and they could not reach either shore of the stream.

At last they managed to leap from the logs, not to the bank, but to a small island in the river. There they were very little better off than on the raft. They were on land, it is true, but there was still no way of getting to shore; and as there was nothing on the island to make a fire with, Washington was forced, drenched as he was with ice-water, to pass the long winter night in the open air, without so much as a tiny blaze or a handful of coals by which to warm himself.

Unfortunately the night proved to be a very cold one, and poor Gist's feet and hands were frozen before morning. Washington got no frost-bites, but his sufferings must have been great.

During the night that part of the stream which lay between the island and the shore that Washington wished to reach froze over, and in the morning the travellers were able to renew their journey. Once across that, the worst of their troubles were over.

Is it any wonder that a young man who did his duty in this way rapidly rose to distinction? He was always in earnest in his work, and always did it with all his might. He never shammed or shirked. He never let his own comfort or his own interest stand in the way when there was a duty to be done. He was a great man before he became a celebrated one, and the wisest men in the country found out the fact.

When the revolution came there were other soldiers older and better known than Washington, but there were men in Congress who had watched his career carefully. They made him, therefore, commander-in-chief of the American armies, knowing that nobody else was so sure to do the very best that could be done for the country. They did not make him a great man by appointing him to the chief command; they appointed him because they knew he was a great man already.