When the British succeeded in taking Lieutenant Jones's little gun-boats and making a landing [see The Battle Of Lake Borgne], they supposed that the hardest part of their work was done. It was not far from their landing-place to New Orleans, and there was nothing in their way. Their army numbered nearly twenty thousand men, and the men were the best soldiers that England had. Many of them were Wellington's veterans.

It seemed certain that such an army could march into New Orleans with very little trouble indeed, and everybody on both sides thought so--everybody, that is to say, but General Jackson. He meant to fight that question out, and as the Legislature and many of the people in the city would do nothing to help him, he put the town under martial law, and worked night and day to get together something like an army.

"We Must Fight Them Tonight!"

On the 23d of December, 1814, the British arrived at a point a few miles below the city, and went into camp about noon. As soon as Jackson heard of their arrival he said to the people around him, "Gentlemen, the British are below: we must fight them tonight."

He immediately ordered his troops forward. He had made a soldier of everybody who could carry a gun, and his little army was a curiously mixed collection of men. There were a few regulars, in uniform; there were some Mississippi troopers, and Coffee's Kentucky and Tennessee hunters, in hunting-shirts and jeans trousers; there were volunteers of all sorts from the streets of New Orleans--merchants, lawyers, laborers, clerks, and clergymen--armed with shot-guns, rifles, and old muskets; there were some criminals whom Jackson had released from prison on condition that they would fight; there was a battalion of free negroes, who were good soldiers; and, finally, there were about twenty Choctaw Indians.

With this mixed crowd Jackson had to fight the very best troops in the British army. Only about half of his men had ever heard a bullet whistle, and less than half of them were drilled and disciplined; but they were brave men who believed in their general, and they were about to fight for their country as brave men should. When all were counted--backwoodsmen, regulars, city volunteers, negroes, Indians, and all--the whole army numbered only 2131 men! But, weak as this force was, Jackson had made up his mind to fight with it. He knew that the British were too strong for him, but he knew too that every day would make them stronger, as more and more of their troops would come forward each day.

The British camp was nine miles below the city, on a narrow strip of land between the river and a swamp. Jackson sent a gun-boat, the Carolina, down the river, with orders to anchor in front of the camp and pour a fire of grape-shot into it. He sent Coffee across to the swamp, and ordered him to creep through the bushes, and thus get upon the right flank of the British. He kept the rest of his army under his own command, ready to advance from the front upon the enemy's position.

But no attack was to be made until after dark. The army was kept well out of sight, and the British had no suspicion that any attack was thought of. They did not regard Jackson's men as soldiers at all, but called them ragamuffins--that is to say, a mob of ragged citizens--and the most they expected such a mob to do was to wait somewhere below the city until the British soldiers should get ready to drive them away with a few volleys. 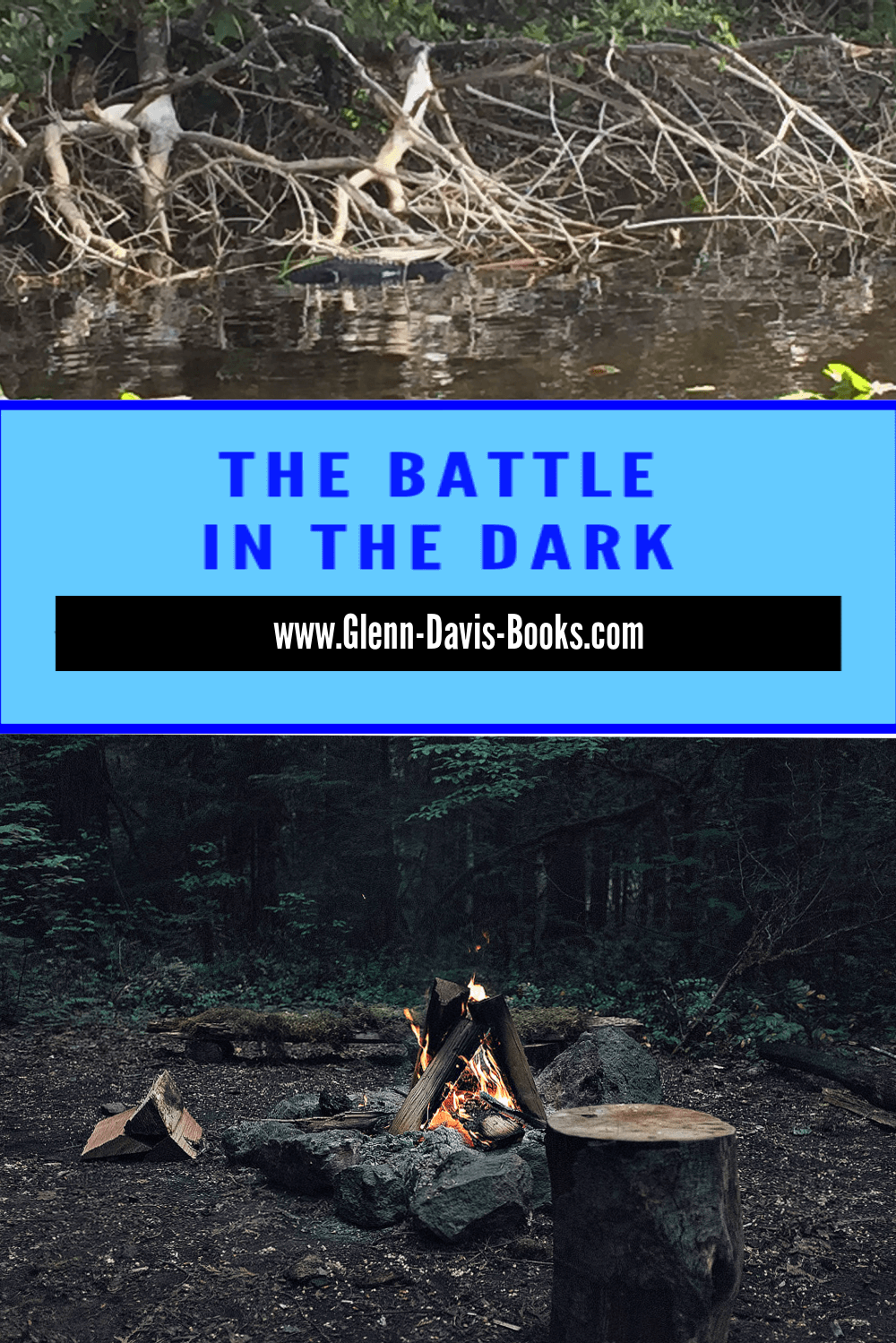 So the British lighted their camp-fires, stacked their arms for the night, and cooked their suppers. They meant to stay where they were for a day or two until the rest of their force could come up, and then they expected to march into the town and make themselves at home.

Night came on, and it was exceedingly dark. At half-past seven o'clock there came a flash and a roar. The Carolina, lying in the river, within a few hundred yards of the camp, had begun to pour her broadsides into the British quarters. Her cannon vomited fire, and sent a hail-storm of grape-shot into the camp, while the marines on board kept up a steady fire of small-arms.

The British were completely surprised, but they were cool-headed old soldiers, who were not to be scared by a surprise. They quickly formed a line on the bank, and, bringing up some cannon, gave battle to the saucy gun-boat.

For ten minutes this fight went on between the Americans on the river and the British on shore; then Jackson ordered his troops to advance. His columns rushed forward and fell upon the enemy, again surprising them, and forcing them to fight on two sides at once. Coffee, who was hidden over in the swamp, no sooner heard the roar of the Carolina's guns than he gave the word to advance, and, rushing out of the bushes, his rough Tennesseeans and Kentuckians attacked still another side of the enemy's position.

Still the sturdy British held their ground, and fought like the brave men and good soldiers that they were. It was too dark for anybody to see clearly what was going on. The lines on both sides were soon broken up into independent groups of soldiers, who could not see in what direction they were marching, or maintain anything like a regular fight. Regiments and battalions wandered about at their own discretion, fighting whatever bodies of the enemy they met, and sometimes getting hopelessly entangled with each other. Never was there so complete a jumble on a battle-field. Whenever two bodies of troops met, they had to call out to each other to find out whether they were friends or foes; then, if one body proved to be Americans and the other British, they delivered a volley, and rushed upon each other in a desperate struggle for mastery.

Sometimes a regiment would win success in one direction, and just as its enemy on that side was driven back, it would be attacked from the opposite quarter. Coffee's men were armed with squirrel rifles, which, of course, had no bayonets; but the men had their long hunting-knives, and with no better weapons than these they did not hesitate to make charge after charge upon the lines of gleaming bayonets.

The British suffered terribly from the first, but their steadiness was never lost for a moment. The mad onset of the Americans broke their lines, and in the darkness it was impossible to form them again promptly; but still the men kept up the fight, while the officers, as rapidly as they could, directed their detached columns towards protected positions.

Retreating slowly and in as good order as they could, the British got beyond the range of the Carolina's guns by nine o'clock, and, finding a position where a bank of earth served for a breastwork, they made a final stand there. It was impossible to drive them from such a position, and so, little by little, the Americans withdrew, and at ten o'clock the Battle in the Dark was at an end.

The End Result Of
The Battle In The Dark

Now let us see what Jackson had gained or lost by this hasty attack. The British were still in a position to threaten New Orleans. They had not been driven away, and the rest of their large army, which had not yet come up, was hurrying forward to help them. They had lost a great many more men than Jackson had, but they could spare men better than he could, and they were not whipped by any means. Still, the attack was equal to a victory for the Americans. It is almost certain that if Jackson had waited another day before fighting he would have lost New Orleans, and the whole Southwest would have been overrun.

But, by making this night attack, he showed the British that he could and would fight; and they, finding what kind of a defence he meant to make, made up their minds to move slowly and cautiously. They waited for the rest of their force to come up, and while they were waiting and getting ready Jackson had more than two weeks' time in which to collect troops from the country north of him, to get arms and ammunition, and to throw up strong fortifications. When the British made their grand attack on the 8th of January, 1815, they found Jackson ready for them. His army was increased, his men were full of confidence, and, best of all, he had a line of strong earth-works to fight behind. It is commonly said that his fortifications were made of cotton-bales, but that is an error. When he first began to fortify, he used some cotton-bales, and some sugar, which, it was thought, would do instead of sand; but in some of the early skirmishes it was found that the sugar was useless, because it would not stop cannon-balls; while the cotton was worse, because it took fire, and nearly suffocated the men behind it with smoke. The cotton and sugar were at once thrown aside, and the battle of New Orleans was fought behind earth-works. In that battle the British were so badly worsted that they gave up all idea of taking New Orleans, which, a month before, they had believed it would be so easy to capture.