The Battle Of Lake Borgne

When the British made up their minds, near the end of the year 1814, to take New Orleans, and thus to get control of the Mississippi River, there seemed to be very little difficulty in their way.

So far as anybody on either side could see, their only trouble was likely to be in making a landing. If they could once get their splendid army on shore anywhere near the city, there was very little to prevent them from taking the town, and if they had taken it, it is easy to see that the whole history of the United States would have been changed.

They did make a landing, but they did not take New Orleans, and in the story of "The Battle in the Dark" I shall tell how and why they failed. In the present story I want to tell how they landed.

They did make a landing, but they did not take New Orleans, and in the story of "The Battle in the Dark" I shall tell how and why they failed. In the present story I want to tell how they landed.

The expedition consisted of a large fleet bearing a large army. At first the intention was to sail up the Mississippi River, but General Jackson made that impossible by building strong forts on the stream, and so it was necessary to try some other plan.

It happens that New Orleans has two entrances from the sea. The river flows in front of the city, and by that route it is about a hundred miles from the city to the sea; but just behind the town, only a few miles away, lies a great bay called Lake Pontchartrain. This bay is connected by a narrow strait with another bay called Lake Borgne, which is connected directly with the sea.

Lake Borgne is very shallow, but the British knew little about it. They only knew that if they could land anywhere on the banks of Lake Borgne or Lake Pontchartrain they would be within an easy march of New Orleans.

Accordingly, the fleet bearing the British army, instead of entering the mouth of the Mississippi, and trying to get to New Orleans in front, sailed in by the back way, and anchored near the entrance of Lake Borgne. 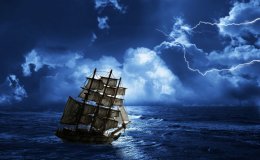 Here the British had their first sight of the preparations made to resist them. Six little gun-boats, carrying twenty-three guns in all, were afloat on the lake under command of Lieutenant Thomas Ap Catesby Jones. These gun-boats were mere mosquitoes in comparison with the great British men-of-war, and when they made their appearance in the track of the invading fleet, the British laughed and wondered at the foolhardiness of the American commander in sending such vessels there.

Lieutenant Thomas Ap Catesby Jones knew what he was about, however, as the British soon found out. He sailed up almost within cannon-shot of the enemy's ships, and they, of course, gave chase to him. Then he nimbly sailed away, with the fleet after him. Very soon a large man-of-war ran aground; then another and another struck the bottom, and the British Admiral began to understand the trick. It was evident that Lake Borgne was much too shallow for the large ships, and so the commander called a halt, and transferred the troops to the smaller vessels of the fleet.

When that was done the chase was begun again by the smaller ships, and for a time with every prospect of success; but presently even these ships were hard aground, and the whole British fleet which had been intended to carry the army across the lake was stuck fast in the mud near the entrance, and thirty miles from the point at which the landing was to be made.

The British commander was at his wits' end. It was clear that the ships could not cross the lake, and the only thing to be done was to transport the army across little by little in the ships' boats, and make a landing in that way. But to do that while Lieutenant Jones and his gun-boats were afloat was manifestly impossible. If it had been attempted, the little gun-boats, which could sail anywhere on the lake, would have destroyed the British army by boat-loads.

Lieutenant Jones was an officer very much given to hard fighting, and in this case the British saw that they must fight him at a disadvantage. As they could not get to him in their ships, they must make an attack in open boats, which, of course, was a very dangerous thing to do, as the American gun-boats were armed with cannon.

The British commander wanted his bravest men for such work, and so he called for volunteers to man the boats. A thousand gallant fellows offered themselves, and were placed in fifty boats, under command of Captain Lockyer. Each boat was armed with a carronade--a kind of small cannon--but the men well knew that the real fighting was not to be done with carronades. The only hope of success lay in a sudden, determined attack. The only way to capture the American gun-boats was to row up to them in the face of their fire, climb over their sides, and take them by force in a hand-to-hand fight.

When the flotilla set sail, on the 14th of December, Lieutenant Jones knew what their mode of attack would be quite as well as Captain Lockyer did. If he let them attack him in the open lake he knew very well that the British could overpower him and capture his fleet; but he did not intend to be attacked in the open lake if he could help it. His plan was to sail slowly, keeping just out of reach of the row-boats, and gradually to draw them to the mouth of the strait which leads into Lake Pontchartrain. At that point there was a well-armed fort, and if he could anchor his gun-boats across the narrow channel, he believed he could destroy the British flotilla with the aid of the fort, and thus beat off the expedition from New Orleans.

Unluckily, while the fleet was yet far from the mouth of the strait the wind failed entirely, and the gun-boats were helpless. They could not sail without wind, and they must receive the attack right where they were.

At daylight on the morning of December 15 the British flotilla was about nine miles away, but was rapidly drawing nearer, the boats being propelled by oars. Lieutenant Jones called the commanders of his gun-boats together, gave them instructions, and informed them of his purpose to make as obstinate a fight as possible. His case was hopeless; his fleet would be captured, but by fighting obstinately he could at least gain time for General Jackson at New Orleans, and time was greatly needed there.

Meanwhile the British boats, carrying a thousand men, all accustomed to desperate fighting, approached and anchored just out of gunshot. Captain Lockyer wished his men to go into action in the best condition possible, and therefore he came to anchor in order to rest the oarsmen, and to give the men time for breakfast.

At half-past ten o'clock the British weighed anchor, and, forming in line, began the advance. As soon as they came within range the American gun-boats opened fire, but with little effect at first. Of course the British could not reply at such a distance, but being under fire, their chief need was to go forward as fast and come to close quarters as quickly as possible. The sailors bent to their oars, and the boats flew over the water. Soon the men at the bows began to fire the carronades in reply to the American cannon. Then as the boats drew nearer, small arms came into use, and the battle grew fiercer with every moment. The British boats were with difficulty kept in line, and their advance grew slower. Oarsmen were killed, and time was lost in putting others into their places. Still the line was preserved, and the battle went on, the attacking boats slowly and steadily advancing all the time.

Two of the American gun-boats had drifted out of place, and were considerably in advance of the rest. Seeing this, Captain Lockyer ordered the men commanding the British boats to surround them, and a few minutes later the sailors were climbing over the sides of these vessels. Their attack was stoutly resisted. The American sailors above them fired volleys into their faces, and beat them back with handspikes. Scores of the British fell back into the water dead or wounded, while their comrades pressed forward to fill their places. There were so many of them that in spite of all the Americans could do to beat them off they swarmed over the gunwales and gained the decks. Their work was not yet done, however. The Americans fiercely contested every inch of their advance, and the two parties hewed each other down with cutlasses, the Americans being slowly beaten back by superior numbers, but still obstinately fighting until they could fight no more.

One by one all the gun-boats were taken in this way, Lieutenant Jones's vessel holding out longest, and the Lieutenant himself fighting till he was stricken down with a severe wound.

Having thus cleared Lake Borgne, the British were free to begin the work of landing. It was a terrible undertaking, however--scarcely less so than the fight itself. The whole army had to be carried thirty miles in open boats and landed in a swamp. The men were drenched with rain, and, a frost coming on, their clothes were frozen on their bodies. There was no fuel to be had on the island where they made their first landing, and to their sufferings from cold was added severe suffering from hunger before supplies of food could be brought to them. Some of the sailors who were engaged in rowing the boats were kept at work for four days and nights without relief.

The landing was secured, however, and the British cared little for the sufferings it had cost them. They believed then that they had little more to do except to march twelve miles and take possession of the city, with its one hundred and fifty thousand bales of cotton and its ten thousand hogsheads of sugar. How it came about that they were disappointed is made clear in the next story: The Battle In The Dark.