Martyn Lloyd-Jones was probably one of the greatest expository teachers of modern times. If you want light reading, this is not it. If you are hungry for deep revelation and application of the Word of God, you should pick up one of over 70 of Martyn Lloyd-Jones’ books.

David Martyn Lloyd-Jones was born in 1899 and began a medical career as a young adult. He obtained his medical degree and became a member of the Royal College Of Physicians in England. However, he felt God’s call on his life to become a minister. After struggling with this decision for two years, he accepted a church’s offer to come and minister. 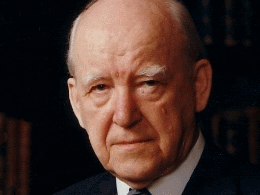 From 1938 to 1968, he was the pastor of the famous Westminister Chapel near Buckingham Place in London, England. His preaching would draw crowds of several thousand. He was solidly conservative in the Christian faith and bluntly opposed liberal Christianity. He would sometimes take months or even years to work through a single chapter in the Bible. His books, many of which were developed from his sermons, on occasion take two or three chapters to expound a single verse! As I said above, when you read Martyn Lloyd-Jones, you do not get fast food; you get a full-course meal with all the trimmings.

Although Martyn Lloyd-Jones was not associated with the Charismatic Movement, he did believe in the Baptism of the Holy Spirit as a distinct experience after salvation. His teachings are respected by leaders and members of many different denominations.

Included in the 70 plus books available are eight volumes on the book of Ephesians and another 14 full-length books going through Romans verse-by-verse. His book, Faith On Trial, examines the quandary of the man in Psalm 73 over the prosperity of the wicked. Why do the wicked succeed and the righteous struggle? This book has been an encouragement to me and many others. It is one of his shorter books and certainly a good place to start if you are unfamiliar with his writings. Over 1600 of his sermons are currently available online.

Dr. Martyn Lloyd-Jones was promoted to heaven in 1981.

In my opinion, much of the preaching we have today is motivational in style or focuses on the same topic continually [i.e. witnessing, end times, etc.]. While there is undoubtedly a place for that kind of message, to grow and mature in Christ requires deep sermons as well. Sometimes church - including worship and sermons - is all about us when it should be all about Him.