Sword fights, cannon fire, the dreaded pirate flag saling right for you bringing death and destruction in its wake - who doesn't love a good pirate yarn?   If you are not up for the challenge, you had better beach your ship because Wayne Thomas Batson has written three pirate novels in his The Isle Chronicle series [Isle Of Swords, Isle Of Fire, Isle Of Stars] that will shake your timbers.  I have read the first two and look forward to when I have the time to journey into the third one.  There is never a dull moment in these books! 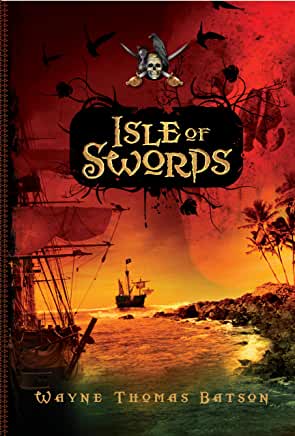 Adventure constantly rolls over the high seas in this series.  Declan Ross is the red-bearded pirate captain of the William Wallace, a hundred-year-old brigantine.  Declan and his loyal crew do not really want a life of piracy, but they feel they have no options.  Still, if they can get that one big treasure, then they can retire and leave that life behind forever.

But Captain Declan's greatest challenge may not be evading British warships, escaping a fleet of pirate ships - commanded by the brutal Bartholomew Thorne - or climbing treacherous mountains in search of treasure.  It may just be trying to control and protect his fiercely independent daughter, Anne Ross, who wants to earn her way onto the crew as a real pirate.

The mystery and danger deepen when Anne finds a young man unconscious on a deserted island where they are trying to make repairs to the William Wallace.  The man was brutally whipped and is near death.  Since the young man has lost his memory but shows excellent skill as a seaman, he earns the nickname Cat.  But who is Cat really?  Will he turn out to be a friend, or will his presence endanger them all?

It has been many years since I first read Isle Of Swords and Isle Of Fire.  [I was introduced to them by my son, Micah.]. As I write this, I am re-reading Isle of Swords and enjoying it very much.  It is a fast-paced adventure with cruel, relentless villains and daring heroes.

Wayne Thomas Batson has also written several books in the fantasy adventure genre.  I haven't personally read any of them, but if that is where your interest lies, you will want to check out the works of this talented and skilled author.

I could not find a Wayne Thomas Batson website, but here is a link to his blog.