How Catherine Douglas Tried To
Save King James Of Scotland

It was bedtime, and the old vaulted chambers of the Dominican monastery at Perth echoed with sounds that would seem incongruous in such a home of austerity, but that the disturbed state of Scotland rendered it the habit of her kings to attach their palaces to convents, that they themselves might benefit by the "peace of the Church," which was in general accorded to all sacred spots.

Thus it was that Christmas and Carnival time of 1435-6 had been spent by the court in the cloisters of Perth, and the dance, the song, and the tourney had strangely contrasted with the grave and self-denying habits to which the Dominicans were devoted in their neighboring cells. The festive season was nearly at an end, for it was the 20th of February, but the evening had been more than usually festive, and had been spent in games at chess, tables, or backgammon, reading romances of chivalry, harping and singing. King James himself, brave and handsome, and in the prime of life, was the most light-hearted of the whole joyous party. He was the most accomplished man in his dominions; for though he had been basely kept a prisoner at Windsor throughout his boyhood by Henry IV of England, an education had been bestowed on him far above what he would have otherwise obtained; and he was naturally a man of great ability, refinement, and strength of character. Not only was he a perfect knight on horseback, but in wrestling and running, throwing the hammer, and "putting the stane," he had scarcely a rival, and he was skilled in all the learned lore of the time, wrote poetry, composed music both sacred and profane, and was a complete minstrel, able to sing beautifully and to play on the harp and organ.

His queen, the beautiful Joan Beaufort, had been the lady of his minstrelsy in the days of his captivity, ever since he had watched her walking on the slopes of Windsor Park, and wooed her in verses that are still preserved. They had now been eleven years married, and their court was one bright spot of civilization, refinement, and grace, amid the savagery of Scotland. And now, after the pleasant social evening, the queen, with her long fair hair unbound, was sitting under the hands of her tirewomen, who were preparing her for the night's rest; and the king, in his furred nightgown, was standing before the bright fire on the hearth of the wide chimney, laughing and talking with the attendant ladies.

The Violence Of The Times

Yet dark hints had already been whispered, which might have cast a shadow over that careless mirth. Always fierce and vindictive, the Scots had been growing more and more lawless and savage ever since the disputed succession of Bruce and Balliol had unsettled all royal authority, and led to one perpetual war with the English. The twenty years of James's captivity had been the worst of all--almost every noble was a robber chief, Scottish borderer preyed upon English borderer, Highlander upon Lowlander, knight upon traveler, every one who had armor upon him who had not; each clan was at deadly feud with its neighbor; blood was shed like water from end to end of the miserable land, and the higher the birth of the offender the greater the impunity he claimed.

Indeed, James himself had been brought next to the throne by one of the most savage and horrible murders ever perpetrated--that of his elder brother, David, by his own uncle; and he himself had probably been only saved from sharing the like fate by being sent out of the kingdom. His earnest words on his return to take the rule of this unhappy realm were these: "Let God but grant me life, and there shall not be a spot in my realm where the key shall not keep the castle, and the bracken bush the cow, though I should lead the life of a dog to accomplish it."

This great purpose had been before James through the eleven years of his reign, and he had worked it out resolutely. The lawless nobles would not brook his ruling hand, and strong and bitter was the hatred that had arisen against him. In many of his transactions he was far from blameless: he was sometimes tempted to craft, sometimes to tyranny; but his object was always a high and kingly one, though he was led by the horrible wickedness of the men he had to deal with more than once to forget that evil is not to be overcome with evil, but with good. In the main, it was his high and uncompromising resolution to enforce the laws upon high and low alike that led to the nobles' conspiracies against him; though, if he had always been true to his purpose of swerving neither to the right nor to the left, he might have avoided the last fatal offense that armed the murderer against his life.

The Plot Against
King James Of Scotland 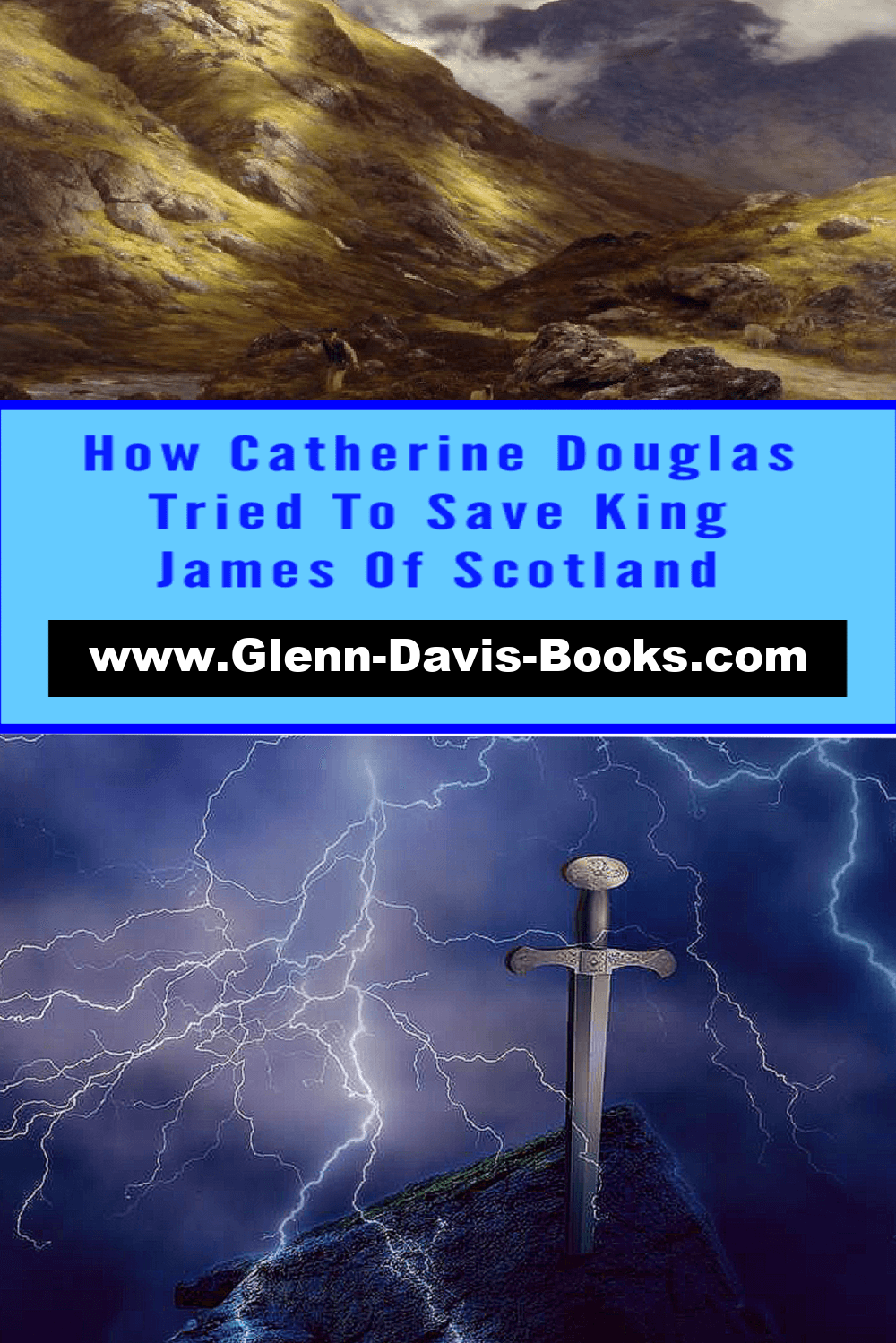 The chief misdoers in the long period of anarchy had been his uncles and cousins; nor was it till after his eldest uncle's death that his return home had been possible. With a strong hand had he avenged upon the princes and their followers the many miseries they had inflicted upon his people; and in carrying out these measures he had seized upon the great earldom of Strathern, which had descended to one of their party in right of his wife, declaring that it could not be inherited by a female. In this he appears to have acted unjustly, from the strong desire to avail himself by any pretext of an opportunity of breaking the overweening power of the great turbulent nobles; and, to make up for the loss, he created the new earldom of Menteith, for the young Malise Graham, the son of the dispossessed earl. But the proud and vindictive Grahams were not thus to be pacified. Sir Robert Graham, the uncle of the young earl, drew off into the Highlands, and there formed a conspiracy among other discontented men who hated the resolute government that repressed their violence. Men of princely blood joined in the plot, and 300 Highland catherans were ready to accompany the expedition that promised the delights of war and plunder.

Even when the hard-worked king was setting forth to enjoy his holiday at Perth, the traitors had fixed upon that spot as the place of his doom; but the scheme was known to so many, that it could not be kept entirely secret, and warnings began to gather round the king. When, on his way to Perth, he was about to cross the Firth of Forth, the wild figure of a Highland woman appeared at his bridle rein, and solemnly warned him "that, if he crossed that water, he would never return alive." He was struck by the apparition, and bade one of his knights to inquire of her what she meant; but the knight must have been a dullard or a traitor, for he told the king that the woman was either mad or drunk, and no notice was taken of her warning.

There was likewise a saying abroad in Scotland, that the new year, 1436, should see the death of a king; and this same carnival night, James, while playing at chess with a young friend, whom he was wont to call the king of love, laughingly observed that "it must be you or I, since there are but two kings in Scotland--therefore, look well to yourself."

Little did the light-hearted monarch guess that at that moment one of the conspirators, touched by a moment's misgiving, was hovering round, seeking in vain for an opportunity of giving him warning; that even then his chamberlain and kinsman, Sir Robert Stewart, was enabling the traitors to place boards across the moat for their passage, and to remove the bolts and bars of all the doors in their way. And the Highland woman was at the door, earnestly entreating to see the king if but for one moment! The message was even brought to him, but alas! he bade her wait till the morrow, and she turned away, declaring that she should never more see his face!

And now, as before said, the feast was over, and the king stood, happily chatting with his wife and her ladies, when the clang of arms was heard, and the glare of torches in the court below flashed on the windows. The ladies flew to secure the doors. Alas! the bolts and bars were gone! Too late the warnings returned upon the king's mind, and he knew it was he alone who was sought. He tried to escape by the windows, but here the bars were but too firm. Then he seized the tongs, and tore up a board in the floor, by which he let himself down into the vault below, just as the murderers came rushing along the passage, slaying on their way a page named Walter Straiton.

There was no bar to the door. Yes, there was. Catherine Douglas, worthy of her name, worthy of the cognizance of the bleeding heart, thrust her arm through the empty staples to gain for her sovereign a few moments more for escape and safety! But though true as steel, the brave arm was not as strong. It was quickly broken. She was thrust fainting aside, and the ruffians rushed in. Queen Joan stood in the midst of the room, with her hair streaming round her, and her mantle thrown hastily on. Some of the wretches even struck and wounded her, but Graham called them off, and bade them search for the king. They sought him in vain in every corner of the women's apartments, and dispersed through the other rooms in search of their prey. The ladies began to hope that the citizens and nobles in the town were coming to their help, and that the king might have escaped through an opening that led from the vault into the tennis-court. Presently, however, the king called to them to draw him up again, for he had not been able to get out of the vault, having a few days before caused the hole to be bricked up, because his tennis-balls used to fly into it and be lost. In trying to draw him up by the sheets, Elizabeth Douglas, another of the ladies, was actually pulled down into the vault; the noise was heard by the assassins, who were still watching outside, and they returned.

There is no need to tell of the foul and cruel slaughter that ensued, nor of the barbarous vengeance that visited it. Our tale is of golden, not of brazen deeds; and if we have turned our eyes for a moment to the Bloody Carnival of Perth, it is for the sake of the king, who was too upright for his bloodthirsty subjects, and, above all, for that of the noble-hearted lady whose frail arm was the guardian of her sovereign's life in the extremity of peril.