THE STORY OF CATHERINE THE GREAT

Peter the Great, the emperor who, in a few years, changed Russia from a country of half-savage tribes into a great European nation, was one day visiting one of his officers, and saw in his house a young girl, who attracted his attention by her beauty and her graceful manners. This girl was a prisoner named Martha, and she was living as a sort of servant and housekeeper in the family of the Russian officer. She had been taken prisoner when the town she lived in was captured. Nobody knows, even to this day, exactly who she was, except that she was a poor orphan girl who had been brought up by a village clergyman; but it is generally believed that her father was a Livonian peasant.

Martha's beauty and the brightness of her mind pleased the emperor so much that, after a while, he made up his mind to marry her, in spite of her humble origin. Peter was in the habit of doing pretty much as he pleased, whether his nobles liked it or not; but even he dared not make a captive peasant girl the Empress of Russia. He therefore married her privately, in the presence of a few of his nearest friends, who were charged to keep the secret. Before the marriage took place he had Martha baptized in the Russian Church, and changed her name to Catherine.

Catherine, The Love Of Peter The Great's Life 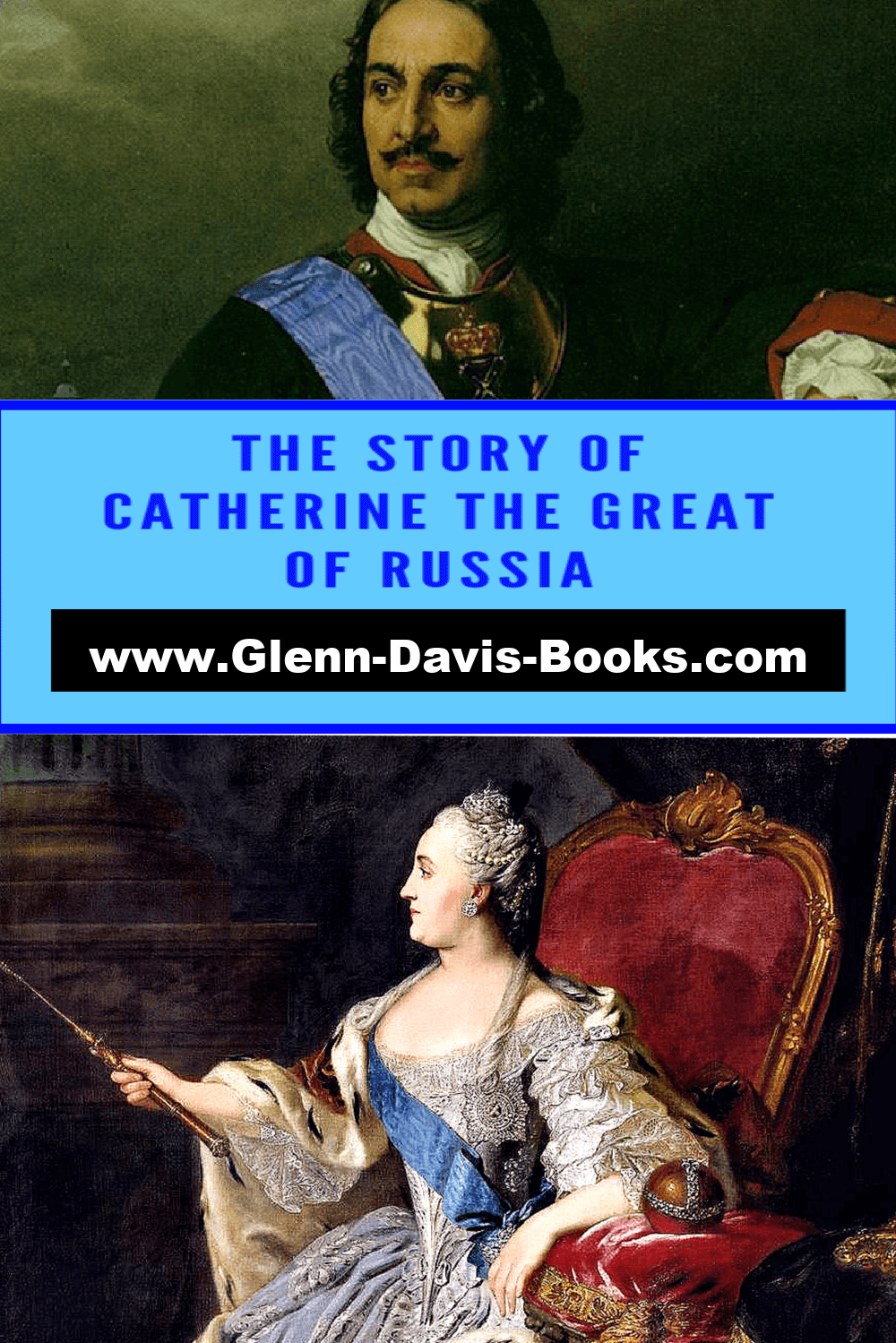 Now Peter had a bad habit of losing his temper, and getting so angry that he fell into fits. As he was an absolute monarch and could do whatever he liked, it was very dangerous for anybody to go near him when he was angry. He could have a head chopped off as easily as he could order his breakfast. But he was very fond of Catherine, and she was the only person who was not in the least afraid of him. She soon learned how to manage him, and even in his worst fits she could soothe and quiet the old bear.

Peter was nearly always at war, and in spite of the hardships and dangers of the camp and battle-field Catherine always marched with him at the head of the army. The soldiers wondered at her bravery, and learned to like her more than anybody else. If food was scarce, the roads rough, and the marches long, they remembered, that Catherine was with them, and were ashamed to grumble. If she could stand the hardships and face the dangers, they thought rough soldiers ought not to complain.

Catherine was a wise woman as well as a brave one. She soon learned as much of the art of war as Peter knew, and in every time of doubt or difficulty her advice was asked, and her opinion counted for as much as if she had been one of the generals. After she had thus shown how able a woman she was, and had won the friendship of everybody about her by her good temper and her pleasant ways, Peter publicly announced his marriage, and declared Catherine to be his wife and czarina. But still he did not crown her.

Refusing To Go To Safety

This was in the year 1711, and immediately afterwards Peter marched into the Turkish country at the head of forty thousand men. This army was not nearly large enough to meet the Turks, but Peter had other armies in different places, and had ordered all of them to meet him on the march. For various reasons all these armies failed to join him, and he found himself in a Turkish province with a very small number of troops. The danger was so great that he ordered Catherine and all the other women to go back to a place of safety. But Catherine would not go. She had made up her mind to stay with Peter at the head of the army, and was so obstinate about it that at last Peter gave her leave to remain. Then the wives of the generals, and, finally, of the lower officers, wanted to stay also. She persuaded Peter to let them do so, and the end of it was that the women all stayed with the army.

Everything went against Peter on this march. The weather was very dry. Swarms of locusts were in the country, eating every green thing. There was no food for the horses, and many of them starved to death. It was hard for the Russians to go forward or to go backward, and harder still to stay where they were.

At last the soldiers in front reported that the Turks were coming, and Peter soon saw a great army of two hundred thousand fierce Moslems in front of his little force, which counted up only thirty-eight thousand men. Seeing the odds against him he gave the order to retreat, and the army began its backward march. As it neared the river Pruth a new danger showed itself. The advance-guard brought word that a great force of savage Crim Tartars held the other bank of the river, completely cutting off Peter's retreat.

The state of things seemed hopeless. With two hundred thousand Turks on one side, and a strong force of Crim Tartars holding a river on the other, Peter's little army was completely hemmed in. There was no water in the camp, and when the soldiers went to the river for it, the Tartars on the other shore kept up a fierce fight with them. A great horde of Turkish cavalry tried hard to cut off the supply entirely by pushing themselves between Peter's camp and the river, but the Russians managed to keep them back by hard fighting, and to keep a road open to the river.

Peter knew now that unless help should come to him in some shape, and that very quickly, he must lose not only his army, but his empire also, for if the Turks should take him prisoner, it was certain that his many enemies would soon conquer Russia, and divide the country among themselves. He saw no chance of help coming, but he made up his mind to fight as long as he could. He formed his men in a hollow square, with the women in the middle, and faced his enemies.

This could not go on forever, of course, and both sides saw what the end must be. As the Turks had many times more men than Peter, it was plain that they would, at last, win by destroying all the Russians.

For three days and nights the terrible slaughter went on. Peter's men beat back the Turks at every charge, but every hour their line grew thinner. At the end of the third day sixteen thousand of their brave comrades lay dead upon the field, and only twenty-two thousand remained to face the enemy.

Towards night on the third day a terrible rumor spread through their camp. A whisper ran along the line that the ammunition was giving out. A few more shots from each soldier's gun, and there would be nothing left to fight with.

Then Peter fell into the sulks. As long as he could fight he had kept up his spirits, but now that all was lost, and his great career seemed near its end, he grew angry, and went to his tent to have one of his savage fits. He gave orders that nobody should come near him, and there was no officer or soldier in all the army who would have dared enter the tent where he lay, in his dangerous mood.

But if Peter had given up in despair, Catherine had not. In spite of Peter's order and his anger, she boldly went into his tent, and asked him to give her leave to put an end to the war by making a treaty of peace with the Turks, if she could. It seemed absurd to talk of such a thing, or to expect the Turks to make peace on any terms when they had so good a chance to conquer Peter, once for all, and to make him their prisoner. Nobody but Catherine, perhaps, would have thought of such a thing; but Catherine was a woman born for great affairs, and she had no thought of giving up any chance there might be to save Peter and the empire.

Her first difficulty was with Peter himself. She could not offer terms of peace to the Turks until Peter gave her leave, and promised to fulfil whatever bargain she might make with them. She managed this part of the matter, and then set to work at the greater task of dealing with the Turks.

She knew that the Turkish army was under the command of the Grand Vizier, and she knew something of the ways of Grand Viziers. It was not worth while to send any kind of messenger to a Turkish commander without sending him also a bribe in the shape of a present, and Catherine was sure that the bribe must be a very large one to buy the peace she wanted. But where was she to get the present? There was no money in Peter's army-chest, and no way of getting any from Russia. Catherine was not discouraged by that fact. She first got together all her own jewels, and then went to all the officers' wives and asked each of them for whatever she had that was valuable--money, jewels, and plate. She gave each of them a receipt for what she took, and promised to pay them the value of their goods when she should get back to Moscow. She went in this way throughout the camp, and got together all the money, all the jewelry, and all the silver plate that were to be found in the army. No one person had much, of course; but when the things were collected together, they made a very rich present, or bribe, for the Grand Vizier.

With this for a beginning, Catherine soon convinced the Turkish commander that it was better to make peace with Russia than to run the risk of having to fight the great armies that were already marching towards Turkey. After some bargaining she secured a treaty which allowed Peter to go back to Russia in safety, and thus she saved the czar and the empire. A few years later Peter crowned her as Empress of Russia, and when he died he named her as the fittest person to be his successor on the throne.

Thus the peasant girl of Livonia, who was made a captive in war and a servant, rose by her genius and courage to be the sole ruler of a great empire--the first woman who ever reigned over Russia. It is a strange but true story.