The Struggles Of Charles Goodyear

Never did any man work harder, suffer more keenly, or remain more steadfast to one great purpose of life, than did Charles Goodyear. The story of his life--for the most part mournful--teems with touching interest. No inventor ever struggled against greater or more often returning obstacles, or against repeated failures more overwhelming. Goodyear is often compared, as a martyr and hero of invention, to Bernard Palissy the potter. He is sometimes called "the Palissy of the nineteenth century." But his sufferings were more various, more bitter, and more long enduring than ever were even those of Palissy; while the result of his long, unceasing labors was infinitely more precious to the world. For if Palissy restored the art of enamelling so as to produce beautiful works of art, Goodyear perfected a substance which gives comfort and secures health to millions of human beings.

Charles Goodyear was born at New Haven, Connecticut, in 1801. He was the eldest of the six children of a leading hardware merchant of that place, a man both of piety and of inventive talent. When Charles was a boy, his father began the manufacture of hardware articles, and at the same time carried on a farm. He often required his son's assistance, so that Charles's schooling was limited. He was very fond of books, however, from an early age, and instead of playing with his mates, devoted most of his leisure time to reading.

It was even while he was a schoolboy that his attention was first turned to the material, the improvement of which for common uses became afterwards his life-work. "He happened to take up a thin scale of India-rubber," says his biographer, "peeled from a bottle, and it was suggested to his mind that it would be a very useful fabric if it could be made uniformly so thin, and could be so prepared as to prevent its melting and sticking together in a solid mass." Often afterward he had a vivid presentiment that he was destined by Providence to achieve these results. 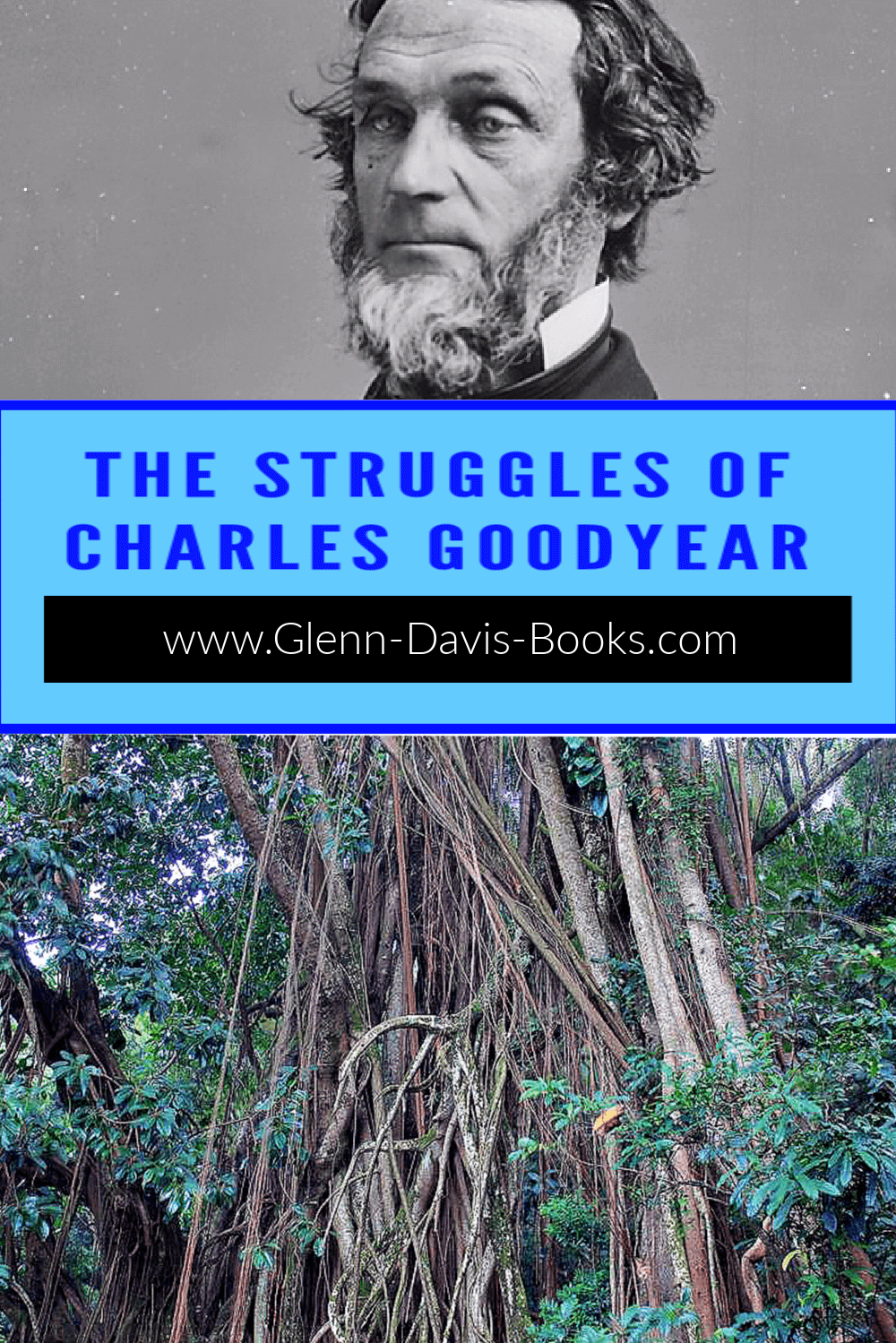 The years of his youth and early manhood were spent in the hardware trade in Philadelphia and then in Connecticut; and at twenty-four he was married to a heroic young wife, who shared his trials, and was ever to him a comforting and encouraging spirit. From boyhood he was always devout and pure in habits. On one occasion, soon after his marriage, he wrote to his wife while absent from her: "I have quit smoking, chewing, and drinking all in one day. You cannot form an idea of the extent of this last evil in this city [New York] among the young men."

Charles Goodyear's misfortunes began early in his career. He failed in business, his health broke down, and through life thereafter he suffered from almost continual attacks of dyspepsia. He was, moreover, a small, frail man, with a weak constitution. He was imprisoned for debt after his failure; nor was this the only time that he found himself within the walls of a jail. That was almost a frequent experience with him in after life.

It was under discouragements like these that Goodyear began his long series of experiments in India-rubber. Already this peculiar substance--a gum that exudes from a certain kind of very tall tree, which is chiefly found in South America--had been manufactured into various articles, but it had not been made enduring, and the uses to which it could be put were very limited.

There is no space here to follow Goodyear's experiments in detail. He entered upon them with the ardor of a fanatic and the faith of a devotee. But he very soon found that the difficulties in his way were great and many. He was bankrupt, in bad health, with a growing family dependent on him, and no means of support. Yet he persevered, through years of wretchedness, to the very end. It is a striking fact that his very first experiment was made in a prison cell.

During the long period occupied by his repeated trials of invention he passed through almost every calamity to which human flesh is heir. Again and again he was thrown into prison. Repeatedly he saw starvation staring him and his gentle wife and his poor little children in the face. He was reduced many times to the very last extreme of penury. His friends sneered at him, deserted him, called him mad. He was forced many times to beg the loan of a few dollars, with no prospect of repayment. One of his children died in the dead of winter, when there was no fuel in the cheerless house. A gentleman was once asked what sort of a looking man Goodyear was. "If you meet a man," was the reply, "who wears an India-rubber coat, cap, stock, vest, and shoes, with an India-rubber money purse without a cent in it, that is Charles Goodyear."

Once, while in the extremity of want, when he was living at Greenwich, near New York, he met his brother-in-law, and said, "Give me ten dollars, brother; I have pawned my last silver spoon to pay my fare to the city."

"You must not go on so; you cannot live in this way," said the other.

"I am going to do better," replied Goodyear cheerily.

It was by accident at last that he hit upon the secret of how to make India-rubber durable. He was talking one day to several visitors, and in his ardor making rapid gestures, when a piece of rubber which he was holding in his hand accidentally hit against a hot stove. To his amazement, instead of melting, the gum remained stiff and charred, like leather. He again applied great heat to a piece of rubber, and then nailed it outside the door, where it was very cold. The next morning he found that it was perfectly flexible; and this was the discovery which led to that successful invention which he had struggled through so many years to perfect. The main value of the discovery lay in this, that while the gum would dissolve in a moderate heat, it both remained hard and continued to be flexible when submitted to an extreme heat. This came to be known as the "vulcanization" of India-rubber.

Two years were still to elapse, however, before Goodyear could make practical use of his great discovery. He had tired everybody out by his previous frequent assertions that his invention had been perfected, when it had until now always proved a failure. Many a time he had gone to his friends, declaring that he had succeeded, so that when he really had made the discovery nobody believed in it.

He was still desperately poor and in wretched health. Yet he moved to Woburn, in Massachusetts, resolutely continuing his experiments there. He had no money, and so baked his India-rubber in his wife's oven and saucepans, or hung it before the nose of her tea-kettle. Sometimes he begged the use of the factory ovens in the neighborhood after the day's work was over, and sold his children's very school-books in order to supply himself with the necessary gum. At this time he lived almost exclusively on money gifts from pitying friends, who shook their heads in their doubts of his sanity. Often his house had neither food nor fuel in it; his family were forced to go out into the woods to get wood to burn. "They dug their potatoes before they were half-grown, for the sake of having something to eat."

Goodyear was terribly afraid that he should die before he could make the world perceive the great uses to which his discovery might be applied. What he was toiling for was neither fame nor fortune, but only to confer a vast benefit on his fellow-men.

At last, after infinite struggles, the absorbing purpose of his life was attained. India-rubber was introduced under his patents, and soon proved to have all the value he had, in his wildest moments, claimed for it. Success thus crowned his noble efforts, which had continued unceasingly through ten years of self-imposed privation. India-rubber was now seen to be capable of being adapted to at least five hundred uses. It could be made "as pliable as kid, tougher than ox-hide, as elastic as whalebone, or as rigid as flint." But, as too often happens, his great discovery enriched neither Goodyear nor his family. It soon gave employment to sixty thousand artisans, and annually produced articles in this country alone worth eight millions of dollars.

Happily the later years of the noble, self-denying inventor were spent at least free from the grinding penury and privations of his years of uncertainty and toil. He died in his sixtieth year (1860), happy in the thought of the magnificent boon he had given to mankind.