The Curious Story Of Vladimir The Great:
A War For An Archbishop

In the latter part of the tenth century Sviatozlaf was Grand Prince of Russia. He was a powerful prince, but a turbulent one, and he behaved so ill towards his neighbors that, when an opportunity offered, one of them converted his skull into a gold-mounted drinking-cup, with an inscription upon it, and his dominions were parcelled out between his three sons--Yaropolk, Oleg, and Vladimir.

Yaropolk, finding his possessions too small for his ambition, made war on Oleg, and conquered his territory; but his brother Oleg having been killed in the war, the tender-hearted Yaropolk wept bitterly over his corpse.

The other brother, Vladimir, was so grieved at the death of Oleg that he abandoned his capital, Novgorod, and remained for a time in seclusion. Yaropolk seized the opportunity thus offered, and made himself master of Vladimir's dominions also. Not long afterwards Vladimir appeared at the head of an army, and Yaropolk ran away to his own capital, Kiev. Vladimir at once resumed the throne, and sent word to Yaropolk that he would in due time return the hostile visit.

About this time Yaropolk and Vladimir both asked for the hand of the Princess Rogneda, of Polotzk, in marriage; and the father of the princess, fearing to offend either of the royal barbarians, left the choice to Rogneda herself. She chose Yaropolk, sending a very insulting message to Vladimir, whereupon that prince marched against Polotzk, conquered the province, and with his own hand slew the father and brothers of the princess. Then, with their blood still unwashed from his hands, he forced Rogneda to marry him. 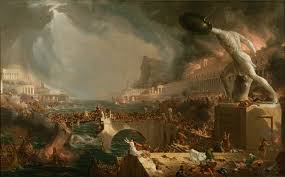 Having attended to this matter, Vladimir undertook to return his brother's hostile visit, as he had promised to do. Yaropolk's capital, Kiev, was a strongly fortified place, and capable of a stout resistance; but Vladimir corrupted Blude, one of Yaropolk's ministers, paying him to betray his master, and promising, in the event of success, to heap honors on his head. Blude worked upon Yaropolk's fears, and persuaded him to abandon the capital without a struggle, and Vladimir took possession of the throne and the country. Even in his exile, however, Yaropolk had no peace. Blude frightened him with false stories, and persuaded him to remove from place to place, until his mind and body were worn out, when, at Blude's suggestion, he determined to surrender himself, and trust to the mercy of Vladimir. That good-natured brother ordered the betrayed and distressed prince to be put to death.

Then Vladimir rewarded Blude. He entertained him in princely fashion, declaring to his followers that he was deeply indebted to this man for his faithful services, and heaping all manner of honors upon him. But at the end of three days he said to Blude: "I have kept my promise strictly. I have received you with welcome, and heaped unwonted honors upon your head. This I have done as your friend. To-day, as judge, I condemn the traitor and the murderer of his prince." He ordered that Blude should suffer instant death, and the sentence was executed.

Grand Prince Of All The Russias

Now that both Oleg and Yaropolk were dead, Vladimir was Grand Prince of all the Russias, as his father before him had been. He invaded Poland, and made war upon various others of his neighbors, greatly enlarging his dominions and strengthening his rule.

But Vladimir was a very pious prince in his heathen way, and feeling that the gods had greatly favored him, he made rich feasts of thanksgiving in their honor. He ordered splendid memorials to various deities to be erected throughout the country, and he specially honored Perune, the father of the gods, for whom he provided a new pair of golden whiskers--golden whiskers being the special glory of Perune.

Not content with this, Vladimir ordered a human sacrifice to be made, and selected for the victim a Christian youth of the capital. The father of the boy resisted, and both were slain, locked in each other's arms.

A Change Of Religion

Vladimir gave vast sums of money to the religious establishments, and behaved generally like a very devout pagan. His piety and generosity made him so desirable a patron that efforts were made by the priests of other religions to convert him. Jews, Mohammedans, Catholics, and Greeks all sought to win him, and Vladimir began seriously to consider the question of changing his religion. He appointed a commission, consisting of ten boyards, and ordered them to examine into the comparative merits of the different religions, and to report to him. When their report was made, Vladimir weighed the matter carefully.

He began by rejecting Mohammedanism, because it forbids the use of wine, and Vladimir was not at all disposed to become a water-drinker. Judaism, he said, was a homeless religion, its followers being wanderers on the face of the earth, under a curse; so he would have nothing to do with that faith. The Catholic religion would not do at all, because it recognized in the pope a superior to himself, and Vladimir had no mind to acknowledge a superior. The Greek religion was free from these objections, and moreover, by adopting it he would bring himself into friendship with the great Greek or Byzantine Empire, whose capital was at Constantinople, and that was something which he earnestly desired to accomplish.

Accordingly, he determined to become a Christian and a member of the Greek Church; but how? There were serious difficulties in the way. In order to become a Christian he must be baptized, and he was puzzled about how to accomplish that. There were many Greek priests in his capital, any one of whom would have been glad to baptize the heathen monarch, but Vladimir would not let a mere priest convert him into a Christian. Nobody less than an archbishop would do for that, and there was no archbishop in Russia.

It is true that there were plenty of archbishops in the dominions of his Byzantine neighbors, and that the Greek emperors, Basil and Constantine, would have been glad to send him a dozen of them if he had expressed a wish to that effect; but Vladimir was proud, and could not think of asking a favor of anybody, least of all of the Greek emperors. No, he would die a heathen rather than ask for an archbishop to baptize him.

Nevertheless, Vladimir had fully made up his mind to have himself baptized by an archbishop. It was his lifelong habit, when he wanted anything, to take it by force. He had taken two thirds of his dominions in that way, and, as we have seen, it was in that way that he got his wife Rogneda. So now that he wanted an archbishop, he determined to take one. Calling his army together, he declared war on the Greek emperors, and promising his soldiers all the pillage they wanted, he marched away towards Constantinople.

The first serious obstacle he met with was the fortified city of Kherson, situated near the spot where Sebastopol stands in our day. Here the resistance was so obstinate that month after month was consumed in siege operations. At the end of six months Vladimir became seriously alarmed lest the garrison should be succored from without, in which case his hope of getting himself converted into a Christian must be abandoned altogether.

While he was troubled on this score, however, one of his soldiers picked up an arrow that had been shot from the city, and found a letter attached to it. This letter informed the Grand Prince that the water-pipes of the city received their supplies at a point immediately in his rear, and with this news Vladimir's hope of becoming a Christian revived. He found the water-pipes and stopped them up, and the city surrendered.

There were plenty of bishops and archbishops there, of course, and they were perfectly willing--as they had been from the first, for that matter--to baptize the unruly royal convert, but Vladimir was not content now with that. He sent a messenger to Constantinople to tell the emperors there that he wanted their sister, the Princess Anne, for a wife; and that if they refused, he would march against Constantinople itself. The Emperors Basil and Constantine consented, and although Vladimir had five wives already, he married Anne, and was baptized on the same day.

Having now become a Christian, the Grand Prince determined that his Russians should do the same. He publicly stripped the god Perune of his gorgeous golden whiskers, and of his rich vestments, showing the people that Perune was only a log of wood. Then he had the deposed god whipped in public, and thrown into the river, with all the other gods.

He next ordered all the people of his capital city to assemble on the banks of the Dnieper River, and, at a signal, made them all rush into the water, while a priest pronounced the baptismal service over the whole population of the city at once. It was the most wholesale baptism ever performed.

That is the way in which Russia was changed from a pagan to a Christian empire. The story reads like a romance, but it is plain, well-authenticated history. For his military exploits the Russian historians call this prince Vladimir the Great. The people call him St. Vladimir, the Greek Church having enrolled his name among the saints soon after his death. He was undoubtedly a man of rare military skill, and unusual ability in the government of men. Bad as his acts were, he seems to have had a conscience, and to have done his duty so far as he was capable of understanding it.