The Troublesome Burghers [Citizens]
Of Ghent

Philip van Artevelde was a Dutchman. His father, Jacob, had been Governor of Ghent, and had made himself a great name by leading a revolt against the Count of Flanders, and driving that tyrant out of the country on one occasion.

Philip was a quiet man, who attended to his own affairs and took no part in public business; but in the year 1381 the good people of Ghent found themselves in a very great difficulty. Their city was subject to the Count of Flanders, who oppressed them in every way. He and his nobles thought nothing of the common people, but taxed them heavily and interfered with their business.

The city of Bruges was the rival of Ghent, and in those days rivals in trade were enemies. The Bruges people were not satisfied with trying to make more money and get more business than Ghent could, but they wanted Ghent destroyed, and so they supported Count Louis in all that he did to injure their neighboring city.

Having this quarrel on their hands, the Ghent people did not know what to do. Count Louis was too strong for them, and they were very much afraid he would destroy their town and put the people to death.

A public meeting was held, and remembering how well old Jacob van Artevelde had served them against the father of Count Louis, they made his son Philip their captain, and told him he must manage this quarrel for them. 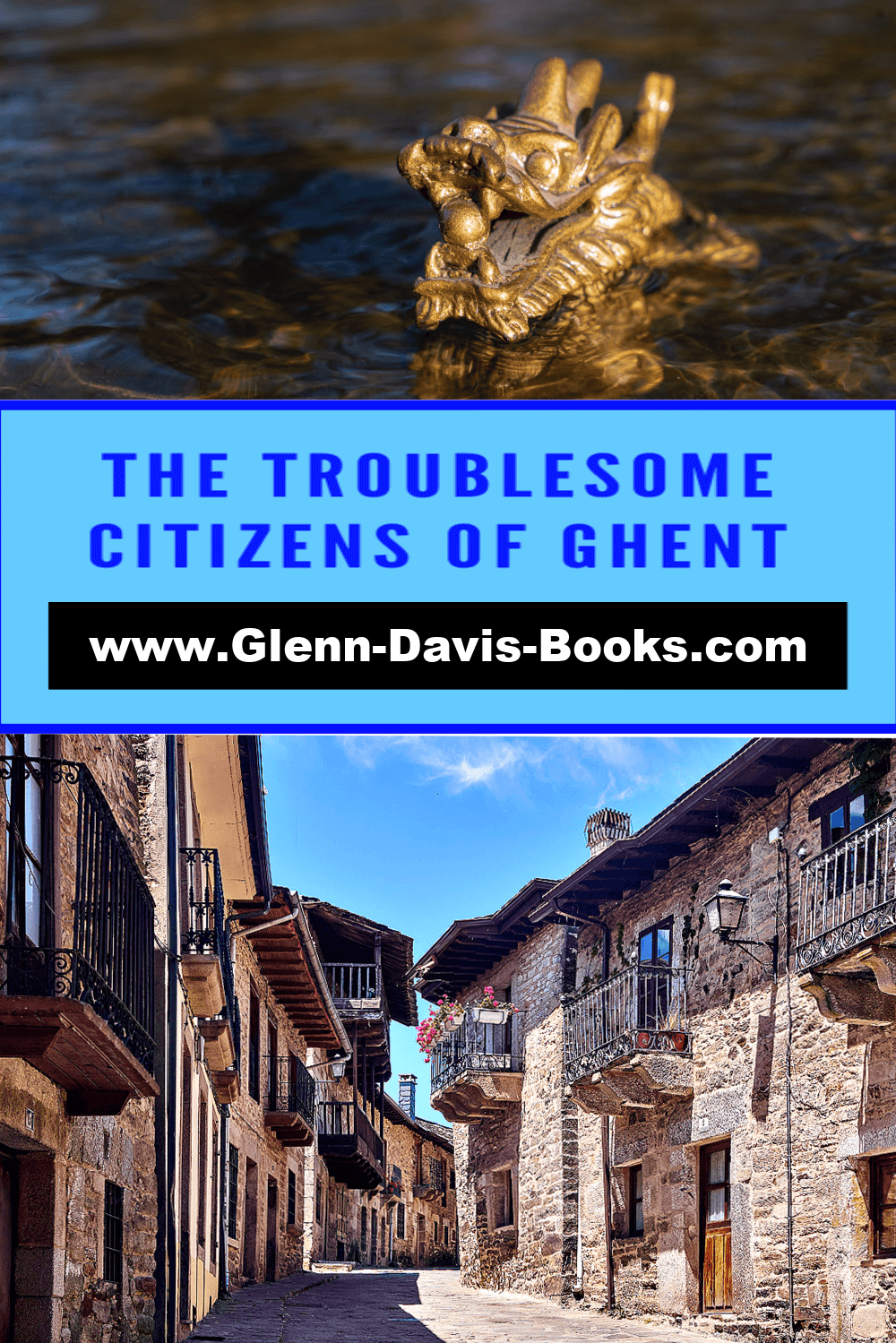 Philip undertook this duty, and tried to settle the trouble in some peaceable way; but the Count was angry, and would not listen to anything that Van Artevelde proposed. He said the Ghent people were rebels, and must submit without any conditions at all, and this the sturdy Ghent burghers refused to do.

Count Louis would not march against the town and give the people a fair chance to fight the matter out. He preferred to starve them, and for that purpose he put soldiers on all the roads leading towards Ghent, and refused to allow any provisions to be taken to the city.

The people soon ate up nearly all the food they had, and when the spring of 1382 came they were starving. Something must be done at once, and Philip van Artevelde decided that it was of no use to resist any longer. He took twelve deputies with him, and went to beg the Count for mercy. He offered to submit to any terms the Count might propose, if he would only promise not to put any of the people to death. Philip even offered himself as a victim, agreeing that the Count should banish him from the country as a punishment, if he would spare the people of the town. But the haughty Count would promise nothing. He said that all the people of Ghent from fifteen to sixty years old must march half-way to Bruges bareheaded, with no clothes on but their shirts, and each with a rope around his neck, and then he would decide how many of them he would put to death and how many he would spare.

The Count thought the poor Ghent people would have to submit to this, and he meant to put them all to death when they should thus come out without arms to surrender. He therefore called on his vassals to meet him in Bruges at Easter, and to go out with him to "destroy these troublesome burghers."

But the "troublesome burghers," as we shall see presently, were not the kind of men to walk out bareheaded, with ropes around their necks, and submit to destruction.

Philip van Artevelde returned sadly to Ghent, on the 29th of April, and told the people what the Count had said. Then the gallant old soldier Peter van den Bossche exclaimed:

"In a few days the town of Ghent shall be the most honored or the most humbled town in Christendom."

Van Artevelde called the burghers together, and told them what the situation was. There were 30,000 people in Ghent, and there was no food to be had for them. There was no hope that the Count would offer any better terms, or that anybody would come to their assistance. They must decide quickly what they would do, and Philip said there were three courses open to them. First, if they chose, they could wall up the gates of the town and die of starvation. Secondly, they could accept the Count's terms, march out with the ropes around their necks, and take whatever punishment the Count might put upon them. If they should decide to do that, Philip said he would offer himself to the Count to be hanged first. Thirdly, they could get together 5000 of their best men, march to Bruges, and fight the quarrel out. 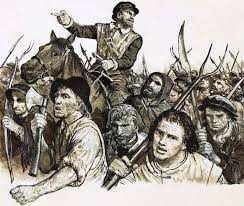 The answer of the people was that Philip must decide for them, and he at once said, "Then we will fight."

The 5000 men were got together, and on the 1st of May they marched out of the town to win or lose the desperate battle. The priests of the city stood at the gates as the men marched out, and prayed for blessings upon them. The old men, the women, and the children cried out, "If you lose the battle you need not return to Ghent, for you will find your families dead in their homes."

The only food there was for these 5000 men was carried in five little carts, while on another cart two casks of wine were taken.

The next day Van Artevelde placed his little army in line on the common of Beverhoutsveld, at Oedelem, near Bruges. There was a marsh in front of them, and Van Artevelde protected their flank by a fortification consisting of the carts and some stakes driven into the ground. He then sent a messenger to the Count, begging him to pardon the people of Ghent, and, having done this, he ordered his men to go to sleep for the night.

At daybreak the next morning the little army was aroused to make final preparations for the desperate work before them. The priests exhorted the men to fight to the death, showing them how useless it would be to surrender or to run away, as they were sure to be put to death at any rate. Their only hope for life was in victory, and if they could not win that, it would be better to die fighting like men than to surrender and be put to death like dogs.

After these exhortations were given, seven gray friars said mass and gave the sacrament to all the soldiers. Then the five cart-loads of provisions and the two casks of wine were divided among the men, for their last breakfast. When that meal was eaten, the soldiers of Ghent had not an ounce of food left anywhere.

Meanwhile the Count called his men together in Bruges, and got them ready for battle; but the people of Bruges were so sure of easily destroying the little Ghent army that they would not wait for orders, but marched out shouting and singing and making merry.

As their column marched along the road in this noisy fashion, the "troublesome burghers" of Ghent suddenly sprang upon them, crying, "Ghent! Ghent!"

The charge was so sudden and so fierce that the Bruges people gave way, and fled in a panic towards the town, with Van Artevelde's men at their heels in hot pursuit. The Count's regular troops tried to make a stand, but the burghers of Ghent came upon them so furiously that they too became panic-stricken and fled. The Count himself ran with all his might, and as soon as he entered the city he ordered the gates to be shut. He was so anxious to save himself from the fury of Van Artevelde's soldiers that he wanted to close the gates at once and leave those of his own people who were still outside to their fate. But it was already too late. Van Artevelde's column had followed the retreating crowd so fast that it had already pushed its head into the town, and there was no driving it back. The five thousand "troublesome burghers," with their swords in their hands, and still crying "Ghent!" swarmed into Bruges, and quickly took possession of the town. The Count's army was utterly routed and scattered, and the Count himself would have been taken prisoner if one of the Ghent burghers had not hidden him and helped him to escape from the city.

Van Artevelde's soldiers, who had eaten the last of their food that morning in the belief that they would never eat another meal on earth, supped that night on the richest dishes that Bruges could supply; and now that the Count was overthrown, great wagon trains of provisions poured into poor, starving Ghent.

There was a great golden dragon on the belfry of Bruges, of which the Bruges people were very proud. That dragon had once stood on the Church of St. Sophia in Constantinople, and the Emperor Baldwin had sent it as a present to Bruges. In token of their victory Van Artevelde's "troublesome burghers" took down the golden dragon and carried it to Ghent.