A Fire-Fighter's Rescue From The Flames

About a hundred years ago [written about 1900], long before James Braidwood had arisen to organize the fire-brigades of Edinburgh and London and set the example which has since been followed by every town in the civilized world, late on a dark afternoon a young stableman, John Elliot by name, was sauntering carelessly homewards down Piccadilly, London, when a glare in the sky, the confused murmurs of a large crowd, and the hurrying footsteps of pedestrians who passed him, told of a not distant fire.

Following the footsteps of the passers-by, he found himself in one of the side streets leading off Piccadilly, and there at the end of the street, a large house was blazing furiously. He worked his way vigorously through the spectators, now so densely gathered as to form a living wedge in the narrow street and block it against all traffic, and at length found himself in a position to see clearly the ruin that had already been wrought on the burning pile. 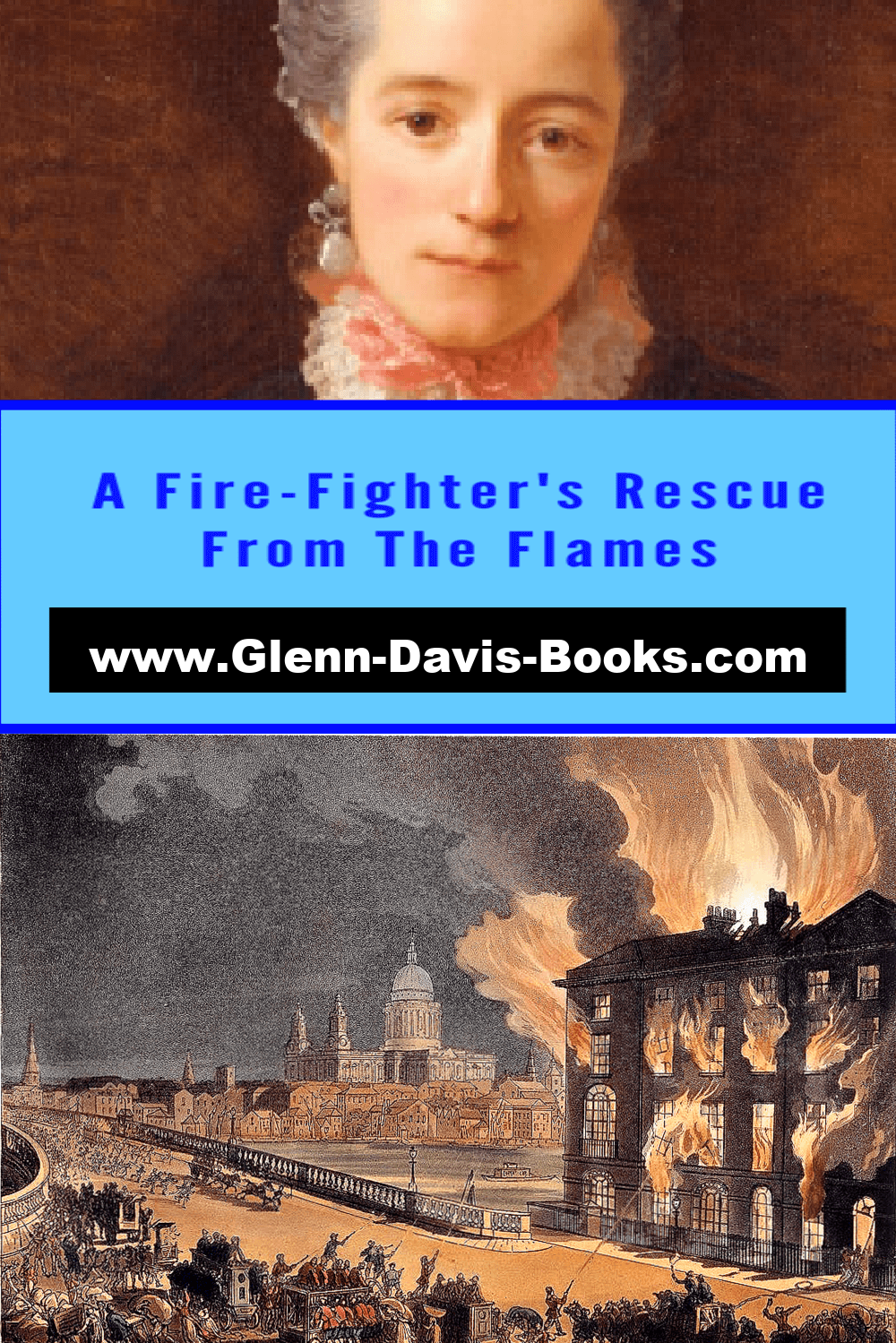 As a matter of fact, all was pretty well over with the house. How far the upper storeys were intact he had little means of judging; but he saw that the ceilings of the first and second floors had given way, and also that the fire was running along the rafters of the floor above. Flames were pouring from half a dozen windows. He turned to a man who stood next him in the concourse.

"The house is nearly done for," he remarked.

"Quite," replied the man. "You see it is burned through, and it is only a question of minutes before the roof must tumble in. The firemen do not dare to make any further attempt. It is a dreadful business."

"Why, don't you know? This is Lady Dover's house--poor old soul! and she is still there, in the top room. No one can save her now, but it is a hideous death all the same."

Elliot looked about him and now understood the pallor on the upturned faces of the crowd. He looked at the house again. The whole street was wrapped in a crimson mist; the falling streams of water which the firemen still continued to direct on the blaze were hissing impotently, and seemed only to feed the fire. In the crowd that watched there was hardly a sound; one could almost hear men's hearts beating as they waited for the conclusion of the tragedy which they knew to be inevitable. But further down the street, where it was not understood that human life was at stake in the midst of this spectacle, rose the sounds of girls laughing, men quarrelling and fighting, whistling, oaths, and merriment. Caps were flying about, and the mass was jostling and swaying to and fro, as before Newgate on a Monday morning.

Do you mean to say," asked Elliot, after a moment, "that the poor old lady is up there and nobody is going to save her?"

"What's the use?" answered the man. "If you think it possible, better try for yourself." But this reply was not heard, for the young stableman had already begun to push his way forward to the group of firemen that stood watching the conflagration in despair.

He was a man of extraordinary strength, and now with a set purpose to inspire him still further, he scattered the crowd to right and left, elbowing, pushing, and thrusting, until he stood before the firemen and repeated his question.

He met with the same answer. "It was impossible," they said. Everything had been done that could be, and now there was nothing but to wait for the end.

"But it is a question of human life," he objected.

In reply they merely pointed to the flame-points now running along every yard of woodwork still left in the building.

Elliot caught a ladder from their hands and, running forward with it, planted it firmly against the house. He had to choose his place carefully, as almost every one of the windows above was belching out an angry blaze.

"Which is the window where they were last seen?" he asked.

The firemen pointed. The crowd at length finding that a brave man was going to risk his life, raised a cheer as they caught sight of him, and standing on tiptoe, peered over each other's shoulders to get a better view of the work that was forward.

"Now then," said Elliot, "don't try to stop the flames, for that is useless, but keep the water playing on the ladder all the time."

He slipped off his shoes, and amid another cheer from the crowd, dashed up it as quick as thought. The window to which the fireman had pointed was clear of flames. On gaining it, Elliot sprang on to the sill and jumped down into the room.

It was lighted brilliantly enough by the glow from the street, and through the dense smoke that was already beginning to fill it he saw two figures.

Both were women, and for a moment the gallant man doubted that he had come in time; for so still and motionless were they that it seemed as if the smoke must have already stifled them, and left them in these startling attitudes. One--a very old lady--was kneeling by the bedside, her head bent forward in despair, her hands flung out over the counterpane. The other--a tall, heavy-looking woman--was standing bolt upright by the window. Neither spoke nor stirred, and the kneeling woman did not even raise her head at the noise of his entrance; the other, with eyes utterly expressionless and awful, supported herself with one hand against the wall, and gazed at him speechlessly. Awestruck by this sight, Elliot had to pause a moment before he found his speech.

"Which is Lady Dover?" he cried at last.

The kneeling woman lifted her head, saw him, and with a cry, or rather a smothered exclamation of hope, got upon her feet and ran forward to him. He hurried her to the window. She obeyed him in silence, for it was clear that terror had robbed her tongue of all articulate speech. He clambered out, turned on the topmost rung, and flinging an arm round her waist, was lifting her out, when the other figure stepped forward and set a hand on his shoulder. The look on this woman's face was now terrible. Something seemed working in her throat and the muscles of her face: it was her despair struggling with her paralysed senses for speech.

"Me too," she at length managed to mutter hoarsely; but the sound when it came was, as Elliot afterwards declared, like nothing in heaven or earth.

"If life is left in me, I will come back for you," he cried.

But his heart failed him when he saw the distance he should have to go, and still more when he noted her size. For the ladder was slippery from the water which the firemen kept throwing upon it, and which alone saved it from catching on fire. Moreover, the clouds of smoke in the room had thickened considerably since his entrance, and it could not be many minutes now before the floor gave way, or the roof crashed in, or both. He had felt his feet scorched through his stockings, when he set foot on the boards.

Down in the street the crowd had increased enormously; gentlemen from the clubs, waiters and loungers from a distance had all gathered to look. As Elliot descended the ladder with his burden a frantic storm of cheering broke forth--for every soul present understood the splendid action that had just been performed; and the crush around the foot of the ladder of those who pressed forward to express their admiration was terrific.

But they knew, of course, nothing of the stout lady still left in the bedroom; and when Elliot, heedless of the cheers and hand-shakes that met him, flung Lady Dover into the arms of the nearest bystander, and turned again towards the ladder, they were utterly at a loss to understand what he could be about.

But he kept his word, A dead hush fell again upon the spectators, as once more the brave man dashed up the ladder, upon which the firemen had ceased now to play. Half-way up he turned.

"Keep on at the pumps!" he called; and then again was up to the window and looked in. The lady had still preserved her former attitude, though leaning now further back against the wall and panting for breath in the stifling smoke. He put his hand out to her.

"Catch hold of my neck and hold tightly round it," he said.

But again she was speechless and helpless. Her eyes lit up as she saw him, but beyond this she hardly seemed to understand his words. Elliot groaned, and finding, after another trial, that she did not comprehend, boldly reached in and grasped her round the waist.

She was heavier even than he had imagined, and for one fearful moment, as he stood poised on the topmost rung, he thought that all was over. It seemed impossible that they should ever reach the ground except by tumbling off the ladder. By a superhuman effort, however, he managed to drag her out, and then clasping her waist with one arm, whilst with the other he held on like grim death, he hung breathless for a moment, and then began slowly to descend.

Up to this point there had been no sound in the street below. But now, as the watchers saw his feet moving down the ladder, their enthusiasm broke out in one deep sigh, followed by yells and shouts of admiration. As the young stableman slowly descended, and finally, by God's mercy, reached the ground with his burden, these feelings broke all bounds. Men rushed round him; guineas were poured by the handful into his pockets; and when these and his hands were full, the gold was even stuffed into his mouth.

But, in the midst of this excitement, a sudden crash caused the spectators to look upwards again. It was the roof of the house that had fallen in, only a minute after Elliot had set his foot upon the ground.

The lady whom he had saved by this second brave ascent was a relative of Lady Dover, by name Mile von Hompesch. It is pleasant to hear that her preserver was rewarded by the family of Lady Dover, who bestowed a pension upon him. At a later period he was in the service of the first Lord Braybrooke, and this narrative was preserved by a member of the family who had often heard Elliot relate it. Like all brave men, he never spoke vaingloriously of his exploit; but always professed great gratitude for his reward, which seemed to him considerably higher than his deserts.