In the old times, when people were in the habit of fighting each other about their religion, the little French seaport Rochelle was called "the city of refuge." The Huguenots, or French Protestants, held the place, and when the armies of the French king tried to take it, in the latter part of the sixteenth century, they were beaten off and so badly used in the fight that the king was glad to make terms with the townspeople.

An agreement was therefore made that they should have their own religion, and manage their own affairs; and to make sure of this the king gave Rochelle so many special rights that it became almost a free city. After that, whenever a Protestant in any part of France found that he could not live peaceably in his own home, he went to Rochelle, and that is the way the place came to be called the city of refuge.

For a good many years the people of Rochelle went on living quietly. They had a fine harbor of their own, their trade was good, and they were allowed to manage their own affairs. At last the new King of France made up his mind that he would not have two religions in his country, but would make everybody believe as he did. This troubled the people of Rochelle, but the king sent them word that he only meant to make them change their religion by showing them that his was better, and that he did not intend to trouble them in any way. 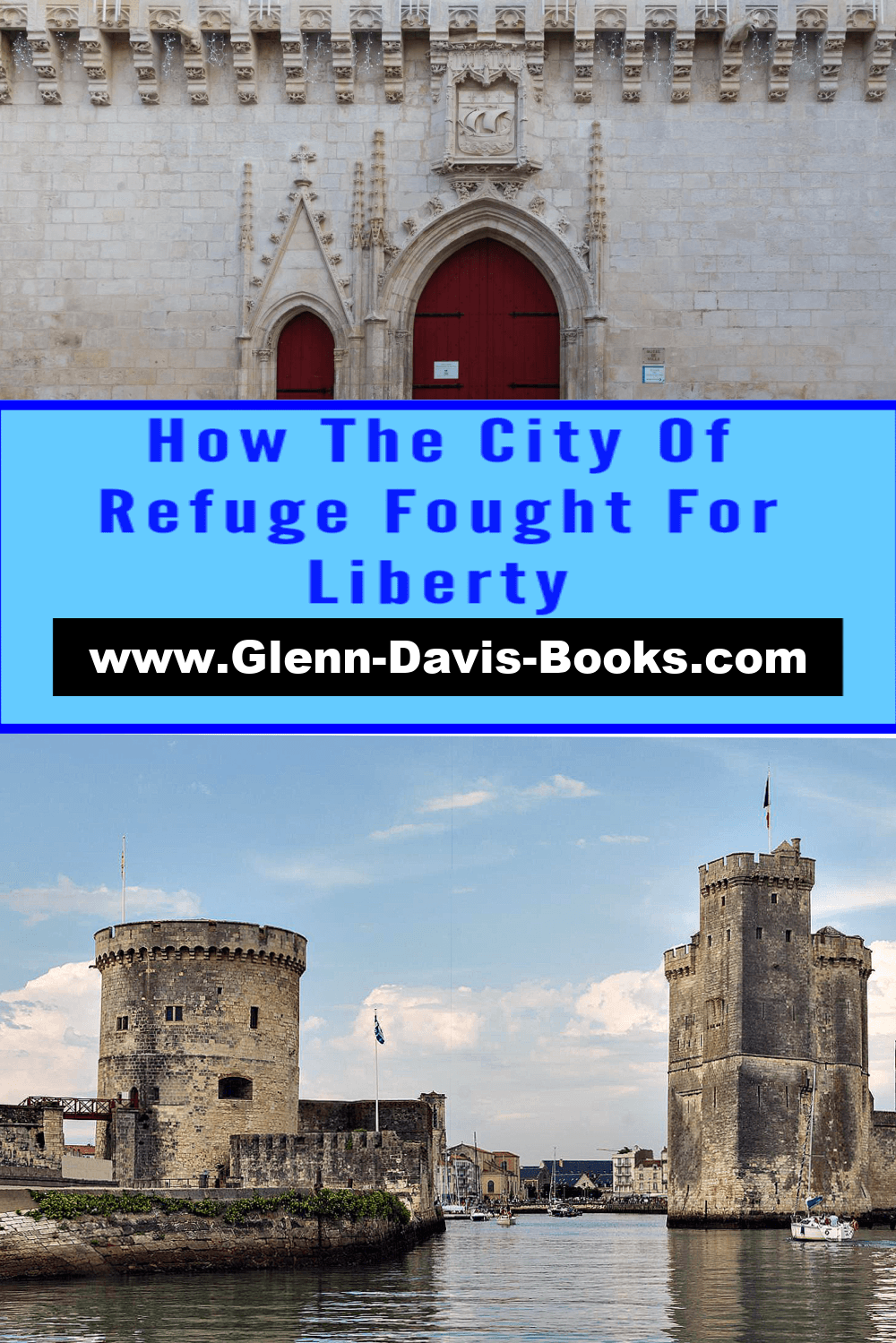 In those days promises of that kind did not count for much; but the king's prime-minister, Cardinal Richelieu, who really managed everything, knew very well that Rochelle could give a great deal of trouble if it chose, and so, perhaps, he really would have let the town alone if it had not been for the meddling of the English prime-minister, Buckingham.

This Buckingham, with an English fleet and army, sailed into the harbor of Rochelle in the middle of July, 1627, and undertook to help the people against the French king. If Buckingham had been either a soldier or a sailor, he might have made himself master of the French king's forts near Rochelle at once; but, although he had command of a fleet and an army, he really knew nothing about the business of a commander, and he blundered so badly that the generals of the French king got fresh troops and provisions into the forts, and were able to hold them in spite of all that the English could do.

Seeing how matters stood, Richelieu at once sent an army to surround Rochelle, and at daylight on the 10th of August the people found a strong force in front of the town. Rochelle had not made up its mind to join the English, and the magistrates sent word to the French general that they wanted peace. They said they were loyal to the French king, and even offered to help drive the English away, if their king would promise not to break the treaty that had been made with them many years before.

It was too late to settle the matter in that way, however. The French general meant to make the town surrender, and so, while the English were fighting to get control of the island of Rhe, at some distance from the town, he began to build works around Rochelle. His plan was to shut the people up in the city and cut off their supplies of food; and when the Rochelle folk saw what he was doing, they opened fire on his men.

The war was now begun, and the Huguenots made terms with Buckingham, hoping, with his help, to win in the struggle. Buckingham promised to help them, and he did try to do so in his blundering way; but he did them more harm than good, for when he found that he could not take the forts he sailed away, taking with him three hundred tons of grain, which he ought to have sent into the town.

It was November when the English left, and Rochelle was in a very bad situation. Richelieu set to work to shut the town in and seal it up. He built strong works all around the land side, and then, with great labor, brought earth and stones and built a mole, or strip of land, nearly all the way across the mouth of the harbor, so that no boats could pass in or out.

The situation was a terrible one, but the people of Rochelle were brave, and had no thought of flinching. They chose the mayor, Guiton, for their commander, and when he accepted the office he laid his dagger on the table, saying: "I will thrust that dagger into the heart of the first man who speaks of giving up the town." He then went to work to defend the place. He strengthened the works, and made soldiers of all the men in the city, and all the boys, too, for that matter. Everybody who could handle a weapon of any kind had to take his place in the ranks. England had promised to send help, and the only question, Guiton thought, was whether or not he could hold out till the help should come; so he laid his plans to resist as long as possible.

The French in great numbers stormed the defences time after time; but the brave Rochellese always drove them back with great loss. It was clear from the first that Guiton would not give way, and that no column, however strong, could force the city gates. But there was an enemy inside the town which was harder to fight than the one outside. There was famine in Rochelle! The cattle were eaten up, and the horses went next. Then everything that could be turned into food was carefully used and made to go as far as it would. Guiton stopped every kind of waste; but day by day the food supply grew smaller, and the people grew weaker from hunger. Starvation was doing its work. Every day the list of deaths grew longer, and when people met in the streets they stared at each other with lean, white, hungry faces, wondering who would be the next to go.

Still these heroic people had no thought of giving up. They were fighting for liberty, and they loved that more than life. The French were daily charging their works, but could not move the stubborn, starving Rochellese.

The winter dragged on slowly. Spring came, and yet no help had come from England. In March the French, thinking that the people must be worn out, hurled their heaviest columns against the lines; but, do what they would, they could not break through anywhere, and had to go back to their works, and wait for famine to conquer a people who could not be conquered by arms.

Abandoned By The British

One morning in May an English fleet was seen outside the mole. The news ran through the town like wildfire. Help was at hand, and the poor starving people were wild with joy. Men ran through the streets shouting and singing songs of thanksgiving. They had borne terrible sufferings, but now help was coming, and they were sure that their heroic endurance would not be thrown away. Thousands of their comrades had fallen fighting, and thousands of their women and children had starved to death; but what was that if, after all, Rochelle was not to lose her liberties?

Alas! their hope was a vain one, and their joy soon turned to sorrow. The English fleet did nothing. It hardly tried to do anything; but after lying within sight of the town for a while it sailed away again and left Rochelle to its fate.

Richelieu was sure that Guiton would surrender now, and so he sent a messenger to say that he would spare the lives of all the people if the town were given up within three days. But the gallant Guiton was not ready even yet to give up the struggle. "Tell Cardinal Richelieu," he said to the messenger, "that we are his very obedient servants;" and that was all the answer he had to make.

The Tragic End Of The Defence Of Rochelle

When the summer came some food was grown in the city gardens, but this went a very little way among so many people, and the famine had now grown frightful. The people gathered all the shellfish they could find at low tide. They ate the leaves off the trees, and even the grass of the gardens and lawns was used for food. Everything that could in any way help to support life was consumed; everything that could be boiled into the thinnest soup was turned to account; everything that could be chewed for its juice was used to quiet the pains of fierce hunger; but all was not enough. Men, women, and children died by thousands. Every morning when the new guard went to take the place of the old one many of the sentinels were found dead at their posts from starvation.

Still the heroic Guiton kept up the fight, and nobody dared say anything to him about giving up. He still hoped for help from England, and meant to hold out until it should come, cost what it might. In order that the soldiers might have a little more to eat, and live and fight a little longer, he turned all the old people and those who were too weak to fight out of the town. The French would not let these poor wretches pass their lines, but made an attack on them, and drove them back towards Rochelle. But Guiton would not open the city gates to them. He said they would starve to death if he let them into Rochelle, and they might as well die outside as inside the gates.

At last news came that the English had made a treaty with the French, and so there was no longer any hope of help for Rochelle, and truly the place could hold out no longer. The famine was at its worst. Out of about thirty thousand people only five thousand were left alive, and they were starving; of six hundred Englishmen who had stayed to help the Rochellese all were dead but sixty-two. Corpses lay thick in the streets, for the people were too weak, from fasting, even to bury their dead. The end had come. On the 30th of October, 1628, after nearly fifteen months of heroic effort and frightful suffering, Rochelle surrendered.

Richelieu at once sent food into the town, and treated the people very kindly; but he took away all the old rights and privileges of the city. He pulled down all the earth-works used by the defenders of the place, and gave orders that nobody should build even a garden fence anywhere near the town. He made a law that no Protestant who was not already a citizen of Rochelle should go thither to live, and that the "city of refuge" should never again receive any stranger without a permit from the king.