The Famous Fight Between
The Arethusa And The La Belle Poule

One of the most famous frigate fights in British history is that between the Arethusa and La Belle Poule, fought off Brest on June 17, 1778. Who is not familiar with the name and fame of "the saucy Arethusa?" Yet there is a curious absence of detail as to the fight. The combat, indeed, owes its enduring fame to two somewhat irrelevant circumstances--first, that it was fought when France and England were not actually at war, but were trembling on the verge of it. The sound of the Arethusa's guns, indeed, was the signal of war between the two nations. The other fact is that an ingenious rhymester--scarcely a poet--crystallized the fight into a set of verses in which there is something of the true smack of the sea, and an echo, if not of the cannon's roar, yet of the rough-voiced mirth of the forecastle; and the sea-fight lies embalmed, so to speak, and made immortal in the sea-song.

The Arethusa was a stumpy little frigate, scanty in crew, light in guns, attached to the fleet of Admiral Keppel, then cruising off Brest. Keppel had as perplexed and delicate a charge as was ever entrusted to a British admiral. Great Britain was at war with her American colonies, and there was every sign that France intended to add herself to the fight. No fewer than thirty-two sail of the line and twelve frigates were gathered in Brest roads, and another fleet of almost equal strength in Toulon. Spain, too, was slowly collecting a mighty armament. What would happen to England if the Toulon and Brest fleets united, were joined by a third fleet from Spain, and the mighty array of ships thus collected swept up the British Channel? On June 13, 1778, Keppel, with twenty-one ships of the line and three frigates, was despatched to keep watch over the Brest fleet, War had not been proclaimed, but Keppel was to prevent a junction of the Brest and Toulon fleets, by persuasion if he could, but by gunpowder in the last resort. 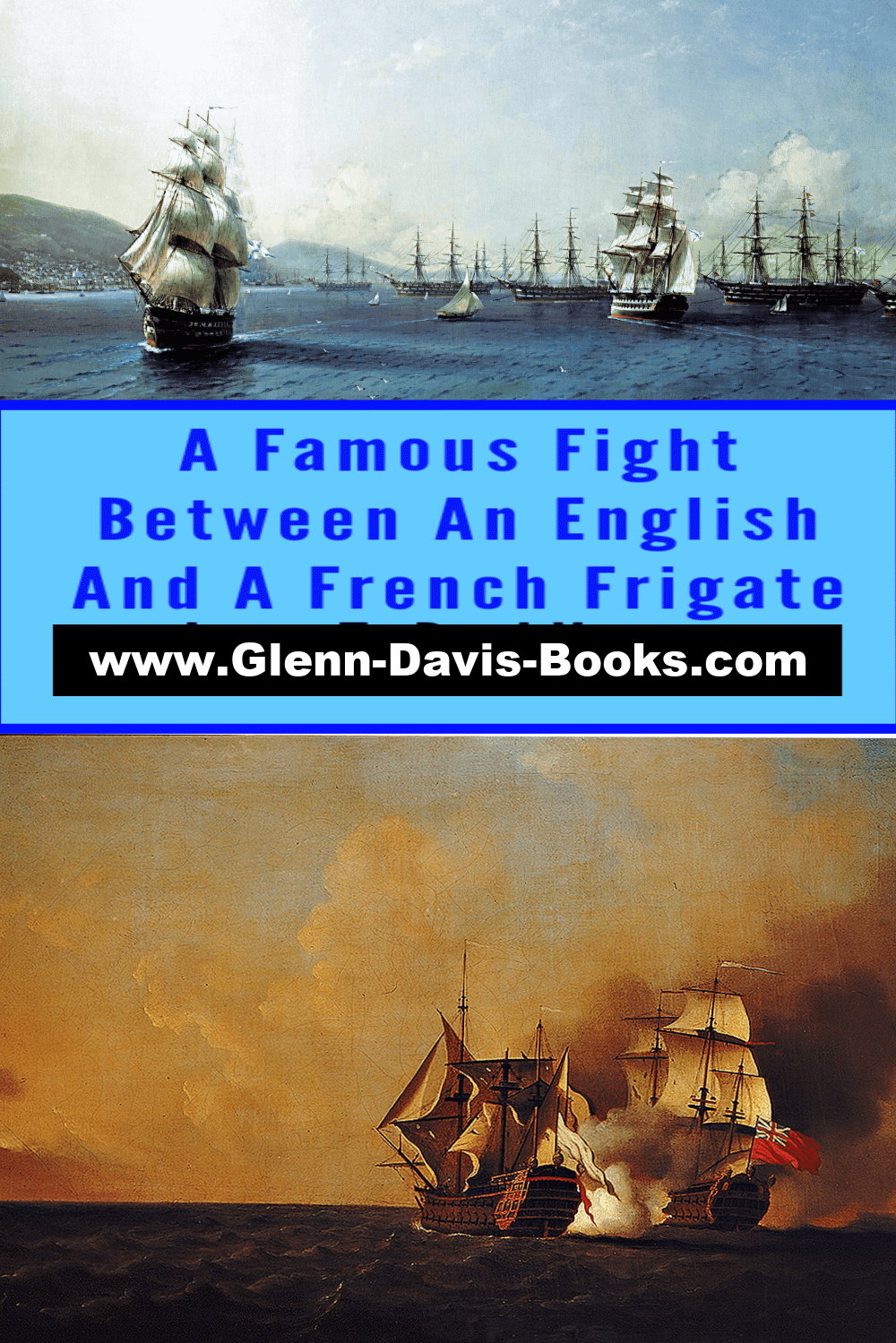 Keppel's force was much inferior to that of the Brest fleet, and as soon as the topsails of the British ships were visible from the French coast, two French frigates, the Licorne and La Belle Poule, with two lighter craft, bore down upon them to reconnoitre. But Keppel could not afford to let the French admiral know his exact force, and signalled to his own outlying ships to bring the French frigates under his lee.

At nine o'clock at night the Licorne was overtaken by the Milford, and with some rough sailorly persuasion, and a hint of broadsides, her head was turned towards the British fleet. The next morning, in the grey dawn, the Frenchman, having meditated on affairs during the night, made a wild dash for freedom. The America, an English 64--double, that is, the Licorne's size--overtook her, and fired a shot across her bow to bring her to, Longford, the captain of the America, stood on the gunwale of his own ship politely urging the captain of the Licorne to return with him. With a burst of Celtic passion the French captain fired his whole broadside into the big Englishman, and then instantly hauled down his flag so as to escape any answering broadside!

Meanwhile the Arethusa was in eager pursuit of the Belle Poule; a fox-terrier chasing a mastiff! The Belle Poule was a splendid ship, with heavy metal, and a crew more than twice as numerous as that of the tiny Arethusa. But Marshall, its captain, was a singularly gallant sailor, and not the man to count odds. The song tells the story of the fight in an amusing fashion:--

Song Of The Arethusa

Whose hearts are cast in honour's mould,

While England's glory I unfold.

Huzza to the Arethusa!

She is a frigate tight and brave

As ever stemmed the dashing wave;

Her men are staunch

To their fav'rite launch,

And when the foe shall meet our fire,

Sooner than strike we'll all expire

On board the Arethusa.

The stoutest they could find in France;

We, with two hundred, did advance

On board the Arethusa.

Our captain hailed the Frenchman, 'Ho!'

The Frenchman then cried out, 'Hallo!'

To our Admiral's lee.'

'Then I must lug you along with me,'

As a matter of fact Marshall hung doggedly on the Frenchman's quarter for two long hours, fighting a ship twice as big as his own. The Belle Poule was eager to escape; Marshall was resolute that it should not escape, and, try as he might, the Frenchman, during that fierce two hours' wrestle, failed to shake off his tiny but dogged antagonist. The Arethusa's masts were shot away, its jib-boom hung a tangled wreck over its bows, its bulwarks were shattered, half its guns were dismounted, and nearly every third man in its crew struck down. But still it hung, with quenchless and obstinate courage, on the Belle Poule's quarter, and by its perfect seamanship and the quickness and the deadly precision with which its lighter guns worked, reduced its towering foe to a condition of wreck almost as complete as its own. The terrier, in fact, was proving too much for the mastiff.

Suddenly the wind fell. With topmasts hanging over the side, and canvas torn to ribbons, the Arethusa lay shattered and motionless on the sea. The shot-torn but loftier sails of the Belle Poule, however, yet held wind enough to drift her out of the reach of the Arethusa's fire. Both ships were close under the French cliffs; but the Belle Poule, like a broken-winged bird, struggled into a tiny cove in the rocks, and nothing remained for the Arethusa but to cut away her wreckage, hoist what sail she could, and drag herself sullenly back under jury-masts to the British fleet. But the story of that two hours' heroic fight maintained against such odds sent a thrill of grim exultation through Great Britain. Menaced by the combination of so many mighty states, while her sea-dogs were of this fighting temper, what had Great Britain to fear? In the streets of many a British seaport, and in many a British forecastle, the story of how the Arethusa fought was sung in deep-throated chorus:

"The fight was off the Frenchman's land;

We forced them back upon their strand;

For we fought till not a stick would stand

Original Title:  A Famous Fight Between An English And A French Frigate